Two Great Britain Rugby League superstars of the past will be facing Team Colostomy UK when we take on the British Asian Rugby Association in Batley on May 22nd.

Ex Leeds Rhinos and Hull, and former World Player of the year Garry Schofield will be in the opposition dugout after he agreed to take on a coaching role, while former Leeds, and Batley outside back Carl Gibson will be pulling his boots on for our opponents.

Team colostomy UK and the British Asian Rugby Association (BARA) are delighted to announce that they will be facing each other in a charity Rugby League game on Sunday 22nd May. 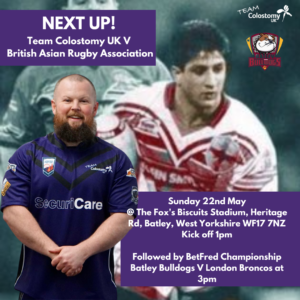 The game will take place at the Fox’s Biscuits Stadium, home of the Batley Bulldogs, and will be a curtain raiser to the Bulldogs BetFred Championship clash with the London Broncos. It will be played under modified masters rugby league rules to enable players of all ages and abilities to take part.

Team Colostomy UK Rugby League is an initiative from the National charity Colostomy UK. It aims to challenge and change perceptions of what it means to live with a stoma, and show that having a stoma need not be a barrier to achieving anything in life, including playing the toughest of team sports. For more information visit www.ColostomyUK.org

The British Asian Rugby Association was formed by Dr Ikram Butt, the first British Asian to play Rugby of either code for England. It is a dual code, inclusive, UK not-for-proﬁt NGO of 18 years standing. It has a history of campaigning for equality and inclusion for Asian communities (not exclusively) in rugby, and has delivered tangible projects which break down cultural and religious barriers and provide sporting beneﬁts to a much under- represented minority ethnic community.

Speaking on behalf of Team Colostomy UK Giovanni Cinque said “We’re delighted to be playing such a prestigious game, and as a curtain raiser to the Championship fixture between Batley and London. The conditions that can lead to stoma surgery are prevalent across all communities in the UK and we hope that our game with BARA will help increase awareness of our charity in West Yorkshire and how people can access support from us if they need it. We’re hugely grateful to Ikram and BARA for the fixture, and to everyone at Batley Bulldogs for hosting us.

On behalf of BARA Ikram Butt commented “We are looking forward to getting back onto the playing field after a two-year absence due to a variety of reasons. No better way to kick off our season is to support an important cause and help make a positive difference to people’s lives. We would like to thank Giovanni Cinque for this wonderful opportunity and our primary sponsors Regal Food PLC and La Romantica Beds for their continued support.’’ We’re excited to have launched our 2022 Playing kit and training wear. The new range is available to buy online now here and will be worn for the first time for at our game on April 3rd against York Lokos.

Our first game of 2022 will take place on Sunday April 3rd when excitingly we face York Lokos as a curtain raiser to the BetFred League one match between Hunslet and Oldham.

The day provides a great opportunity for us to showcase the team, plus reach a new audience in South Leeds.

Our game will kick off at 1pm with Hunslet V Oldham at 3pm. Entry for both games is £15 and admission for our match will be via the members desk

We’re delighted to announce that on Saturday 20th November Team Colostomy UK will be travelling to Leeds to take on a Bramley Buffaloes side at the Arthur Miller Stadium.

After a Covid enforced layoff,  three highly successful comeback games against Robbie’s Roos, Invicta Panthers, and Chorley Panthers have created some great momentum which the team will be keen to continue against a club that are no strangers to Team Colostomy UK.

Bramley Buffaloes chairman and owner of Cheney Payroll Services Martyn Cheney is delighted to host the game “Bramley Rugby League club has a rich and varied history dating back to 1879, but we’re also a modern community focused organisation who are always looking for opportunities to support initiatives that can make a difference, like Team Colostomy UK. We’re looking forward to welcoming them in November and helping to challenge perceptions of what it means to have a stoma”

Giovanni Cinque from Colostomy UK commented on the announcement “Martyn and the Buffaloes have been really supportive of us ever since day one, and we were honoured that our logo featured on the sleeve of their playing shirts this year. After the success of our last two games we’re really excited to have another opportunity to tackle the stoma stigma this year and look forward to an entertaining game in front of a big crowd against a club that have such a great history” 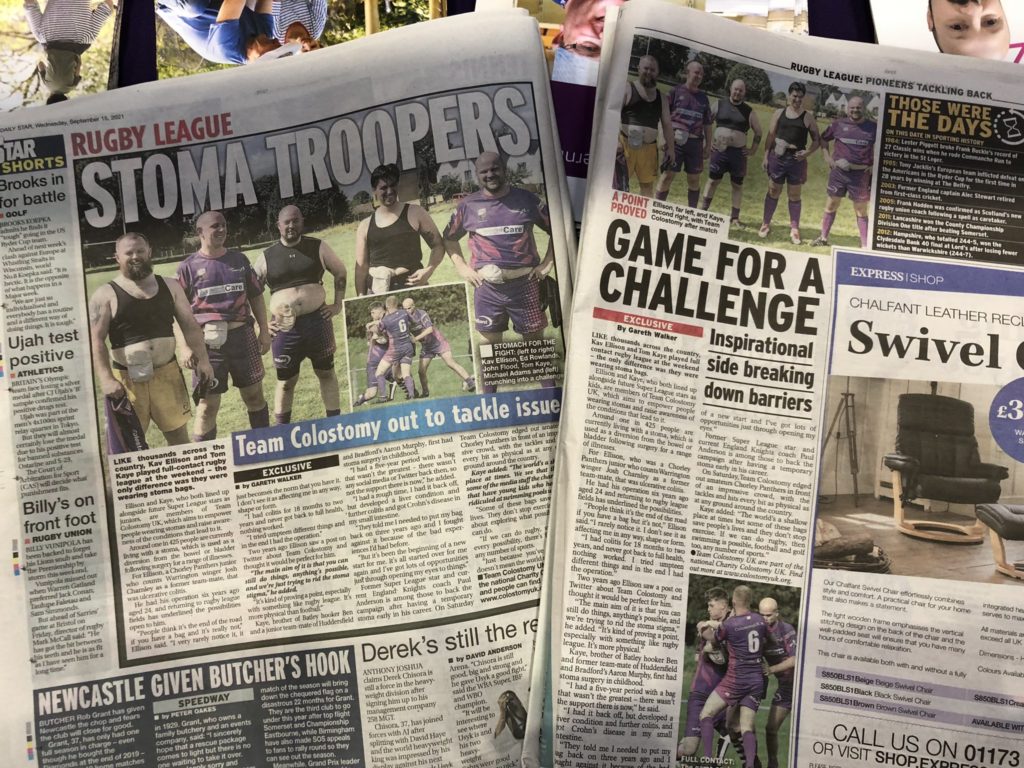 Our game at Chorley Panthers generated some brilliant media coverage

Full- or three-quarter-page colour stories featured in the print versions of the Daily Mirror, Daily Express, and Daily Star who have a combined circulation of over one million.

The online version of the Mirror story can be read here https://www.mirror.co.uk/sport/rugby-league/meet-team-colostomy-uk-rugby-24988790

The team also featured in the BBC Radio 5 Live Rugby League show. You can listen to the full episode hear https://www.bbc.co.uk/programmes/p09vz50x and on the ‘Loose Forward’ podcast which is available to listen here https://looseforwardpodcast.podbean.com/e/up-the-purps-i-m-not-andy-and-twerk-twerk-twerk/

Exciting news! On September 11th  Team Colostomy UK will be returning to the North West and our good friends the Chorley Panthers when we take on a Panthers Select as a curtain raiser to the first team game against Widnes Moorfield Tigers. Kick off is 3pm. 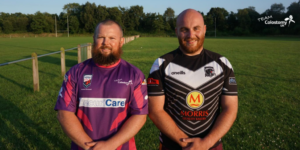 Our last visit to Panther Park saw a bumper crowd including Rugby League stars Josh Charnley, Anthony Gelling, Jamie Ellis, and Owen Farnworth entertained by an end to end game which was followed by a hugely successful fundraising auction and raffle.

Unfortunately the pandemic put pay to our plans for last year’s game but we plan to make 2021 even bigger and better than 2019!

Giovanni Cinque from Colostomy UK was delighted at the news

“Our players can’t wait for the game and excitement is building already. We’re so appreciative of the support the Panthers have given us since we started, and it’s very rare that you’ll see us line up for a game without at least 2 or 3 players in the team that haven’t also donned the famous Black Panthers shirt”

Kaven Ellison has a foot in both camps as a player for Team Colostomy UK and ex player and assistant coach at Chorley.

“I’m absolutely made up about being able to bring Team Colostomy UK back up to Chorley Panthers & the North West. It was a no brainer to reschedule this Charity game again after it got postponed last year. It means an awful lot to me & the club to have this partnership. To be able to raise awareness in not just the Rugby League community, but the wider audience a swell is brilliant.”

All spectators are welcome and refreshments will be available throughout the day.

Tackling The Stoma Stigma with a brand new look!

#TacklingTheStomaStigma for the last time in 2019!