Home > Information > What is a stoma?

What is a stoma?

The terms ‘stoma’ and ‘ostomy’ are often used interchangeably. A stoma is an opening on the surface of the abdomen which has been surgically created to divert the flow of faeces or urine. People who have had stoma surgery are sometimes known as ‘ostomates’.

It is now estimated that one in 335 people in the UK are currently living with a stoma.

Individuals of all ages can have a stoma. Stoma surgery is undertaken to treat a range of illnesses including cancer, diverticulitis and Crohn’s disease or following a trauma to the abdomen.

There are three types of stoma, colostomy, ileostomy and urostomy – all are diversions from the bowel or bladder and there are some differences between them.

Generally, a stoma will be pink and moist (like the inside of our mouths). A stoma will initially be swollen after the operation but this will reduce after 6-8 weeks. There are no nerves in a stoma so there are no sensations when touching it. Everyone’s stoma is different in size or shape . 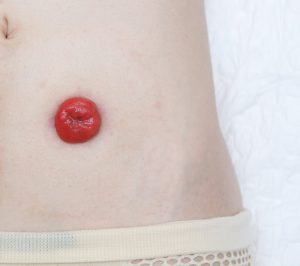 A Colostomy is the term used to describe an opening from the colon (large intestine). The surgeon will bring a part of the colon from inside the patient’s body, through their abdomen to the outside and stitch it down to secure it. Normally this is on the left side of the abdomen. The output from a colostomy differs from person to person but the stoma commonly functions between 1 and 3 times a day. The output tends to be more solid and often resembles a traditional stool.

An ileostomy is the term used to describe an opening from the small intestine, specifically the ileum. The surgeon will bring a part of the small intestine from inside the patients’ body, through their abdomen to the outside and stich it down to secure it. Typically, this will be on the right of the abdomen. An ileostomy is more active, with the output being looser than that of a colostomy. An ileostomy bag will be worn that enables drainage into the toilet between 3-6 times a day.

A urostomy (also called an ileal conduit) is the term used to describe an opening for a person’s urine. A urostomy is formed by taking a piece of a person’s small intestine and attaching the ureters to it forming a passageway for urine to pass through. One end of the tube is brought out through the abdomen to create a urostomy. Usually the bladder is removed but this depends on the operation. A Urostomy is normally on the right-hand side of a person’s abdomen and will have a small spout to allow the urine to exit the body. The urostomy bag will have a bung or tap on the bottom to allow urine to be drained at regular intervals into the toilet.

More detailed information from the NHS can be found by clicking the type of stoma above.

Some ostomy patients have a temporary stoma formed with the intention that it may later be reversed. This is often the case when the diseased or damaged bowel lower down the digestive system needs time to heal for a period of time. Other patients have a permanent stoma formed from the outset but improved surgical techniques mean that operations to form permanent stomas are declining.

Visit our page on Stoma Reversal for more information.