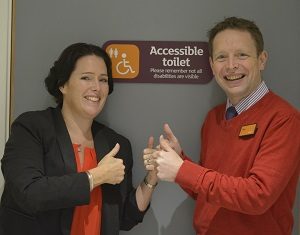 We are constantly reaching out and speaking to organisations, businesses and individuals in the UK to ensure that accessible toilet facilities across the UK meet the needs of people living with a stoma. Below you will find updates on some of the larger organisations we have been working with.

We’re are also working with supporters to organise petitions, share their stories and to speak out when they’ve experienced problems. On a local level supporters are ensuring that smaller businesses and organisations are making the required changes and using inclusive signage.

We’ll be making much more noise in 2022 as part of our Stoma Aware campaign, and with your help the list can keep on growing. If you’d like to help campaign for stoma friendly toilets contact us . We’d love to hear from you.

We’re delighted to report that all Butlins venues in the UK are now operating with stoma friendly toilets and signage.