Home > About Us > Our trustees > Steve Scoffield: Finance Trustee 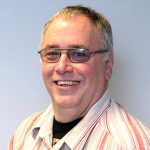 Steve was born in Worcester and lived in North Worcestershire until he moved with his family to North Devon in 1999. Married to Cathy, they have two daughters and two grandchildren who live 100 yards away.

Steve has been a qualified Chartered Accountant since 1984, and worked in general practice until 1999, when he and his family joined the Lee Abbey Community a charity in North Devon which was one of four charities in the Lee Abbey Movement, becoming their Director of Finance and looking after group accounting for eleven years. He left to join the National Autistic Society in 2010. Steve is currently the Director of Finance of two small charities Amigos Worldwide which together with their local partner seeks to create lasting solutions to poverty and hunger in Uganda and Alström Syndrome UK, Alström Syndrome is an ultra-rear genetic condition.

Steve has extensive experience as a charity trustee and treasurer including nine years as treasurer of North Devon Hospice and other charities. He is currently treasurer of The Melanesian Mission. Steve’s experience of voluntary sector policy, marketing and fundraising, strategy, governance and voluntary sector financial management, has been recognised with the award following an examination of his experience of the ICAEW Diploma in Charity Accounting. He has also recently achieved the ICAEW Business and Finance Professional designation.

Steve had suffered with ulcerative colitis since early teenage, he was diagnosed with the early stages of bowel cancer in 2012 and had a permanent ileostomy formed. Prior to his operation Steve was given a copies of Tidings by a friend and was encouraged to join the closed Facebook group. Steve found the support, advice and encouragement provided through Colostomy UK invaluable.

Steve is looking forward to getting to know more about the charity. He hopes to use his professional and third sector experience to support Colostomy UK to improve the life of ostomates.

I have had an ileostomy for 10 years and wanted to something back for the support the charity has given me.

I am a Chartered Accountant and have worked full time in the third sector for the last 23 years, working as a director of finance and have held trustees’ positions.

I have been a trustee of a number of charities including nine years as treasurer of our local hospice. Being a trustee is not only about what I have been able to do but has provided me with opportunities for my personal professional development. I have learnt so much over the years.

Q- What have been the challenges you’ve faced, and are currently facing in today’s climate?

Ensuring that the best use is made of our donors’ funds, balancing the books as we all deal with the current financial crisis.

Q- Why do you think charities matter?

Charities are there for us all, a lot of us will receive support that only charities are able to provide.

Employment and working as a trustee can great time pressures. I find it vital that I give myself down time for family, hobbies and watching Gloucester Rugby

Q – What advice would you give to someone who is thinking of becoming a trustee i.e., the value of volunteering to gain an understanding of how charities function?

If you have the time to commit to becoming a trustee go for it. Find a charity which will support you and help you to develop as a trustee. You will be surprised how much you have to offer.

Not being able to spend the time to do a good job.