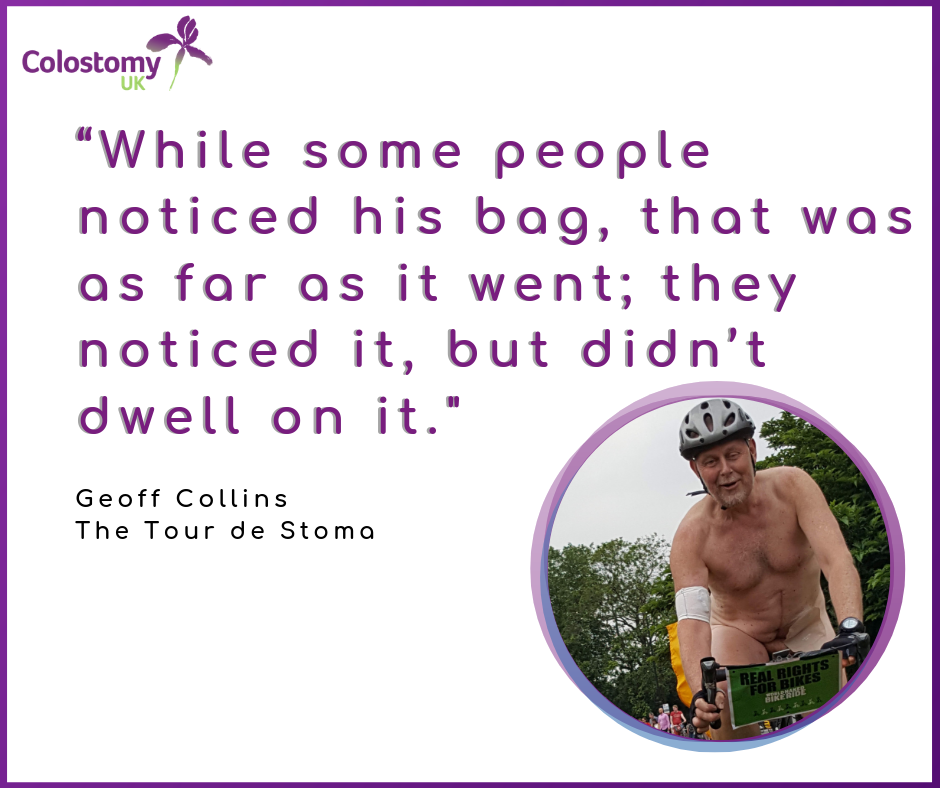 On the 9th June 2018 around a thousand cyclists took to the streets of London as part of the 15th Annual World Naked Bike Ride. This fun and popular protest, which is now a familiar sight in cities across the globe, aims to raise awareness about global oil dependency, car culture and the vulnerability of cyclists on city streets. It is also a celebration of body freedom. Full or partial nudity is the order of the day with many participants decorating themselves with body art and body paint. Some wear fancy dress too. At last year’s event, cyclists could choose from seven routes, all of which ended at Hyde Park Corner. Geoff Collins, at the time an ostomate of just six months, who had only recently finished chemotherapy, opted for the one which took in major tourist spots like Piccadilly and Trafalgar Square.

So what made him do it? I was certainly intrigued to know. The cycling bit I could understand. And, to be that active so soon after surgery is obviously impressive, but naked? Isn’t that just attention seeking? I have to admit that this was going through my mind when I called Geoff. In fact, if I’m being brutally honest, I was expecting him to be a bit of a weirdo… but I couldn’t have been more wrong. Instead, I found a courageous and inspirational man who, despite the shock of bowel cancer, has remained positive as well as determined not to let a stoma define him or his life.

Geoff retired from teaching French and IT at secondary school in September 2017. At age 60 he conducted the standard bowel screening test, which came back all clear. But, in October 2017, although feeling fine in himself, Geoff noticed a change in his bowel habits. Luckily he didn’t delay visiting his local G.P. surgery where he was referred for a colonoscopy. It was while waiting for this appointment to come through that the symptoms worsened. To begin with it was constipation, but as time progressed Geoff started to experience vomiting after eating. Matters came to a head in late October when, having been to bed early one night because he felt so bloated, Geoff woke up in such pain that his wife rushed him to hospital. Here, he was admitted to a surgical ward, where a CT scan revealed his bowel was blocked. If the need for emergency surgery wasn’t shocking enough, the surgeon also told Geoff that he would have to have a stoma as well. So, with no time to prepare, Geoff found himself on the way down to theatre. He woke later to discover that the obstruction in his bowel had been caused by cancer. He started a 6-month course of chemotherapy in December 2017.

Geoff was determined to get up and about just as soon as his body would let him. In hospital he was encouraged to take gentle walks around the ward. Once home, he built on these by walking up and down the garden. On 12 November, eight days after discharge, his step count breached the 5,000 mark. On 16 November, he took his first trip away from home and clocked just over 10,000 steps. By 22 November he was at 20,000 steps and has managed to achieve this every day since. As Geoff told me these statistics I was somewhat aghast. I even began to question whether I should make more of an effort myself! I’m pretty sure that many of you reading this, while marvelling at Geoff’s achievement, might query doing so much exercise so soon after surgery. This was certainly my initial reaction. As we know, although exercise is vital to post-op recovery and ongoing physical and mental wellbeing, it’s also very important not to over exert yourself in the early days. But, we have to understand Geoff’s levels of activity in the context of a man that had been very active all his life. And, I might add, Geoff’s definition of active is almost certainly different to yours and mine. From age 40 onwards he had cycled the 50 mile round trip to work every single day! As Geoff explained, it was an encounter with paraganglioma (a form of cancer) back in the 1980s that provided the initial impetus for doing this. He hoped that getting fit would help him to fight the heart and blood pressure problems that are known to accompany the condition. Thus, having been so active for so many years, he was absolutely desperate to get out and about again. By mid-December, six weeks after his surgery, Geoff had started running again. It was about this time that he remembers posting the message ‘I’m back’ on the family WhatsApp group. He is also convinced that doing the things he loved was a tonic in its own right. The sense of being on the road back to ‘normality’ made him feel good.

As I mentioned earlier, Geoff has something of a history where cycling is concerned. Post surgery, he delayed getting back in the saddle until the December. However, once the chemotherapy started, cycling became more problematic as, like many people, he suffered the side effects of neuropathy. For those readers who are unfamiliar, this is peripheral nerve damage, that can manifest itself in many ways, including numbness, increased sensitivity and a tingling or burning sensation. It wasn’t until April 2018 that he had re-started cycling ‘proper’. This brings us neatly back to the subject of the Naked Bike Ride. Geoff’s participation last June, was not his first. In fact, he started attending the annual protest in 2007 when he was cycling to work each day. He initially decided to get involved as he was keen to raise awareness about cyclists as road users and draw attention their vulnerability. As he said, when cycling to work in all his cycling gear he sometimes felt he was invisible to motorists. Conversely, cycling in the nude he found that there wasn’t a single road user that failed to notice him! As he explained, during the Naked Bike Ride, motorists hoot their horns and wave with encouragement, rather than with anger and irritation.

Geoff, of course, still feels passionately about the safety of cyclists, but his reasons for taking part in last year’s ride were slightly different. It was while in hospital that one of the stoma care nurses mentioned to him and his wife that many people with stomas suffer from problems with their body image. At Colostomy UK we are only too well aware of this and the social isolation it can lead to. Geoff’s ride in 2018 was therefore driven (or should I say pedalled?!) by the desire to demonstrate that having a stoma is fine; it’s not a barrier. He wanted to show the world that he and not his stoma was in charge of his life. He also hoped that other ostomates would draw strength from what he was doing. I asked Geoff about the reactions he received. Geoff said that his perception was that while some people noticed his bag, that was as far as it went; they noticed it, but didn’t dwell on it. To his mind, the wearer is more conscious about the presence of a bag than anyone else. There was one specific incident though, that he does recall very clearly. This occurred when he stopped by another cyclist who appeared to have a slow puncture. The man’s girlfriend was there and remarked on Geoff’s bag. She said that her Dad had one too and that she was going to tell him she had seen Geoff, because his confidence had suffered so much since the surgery. Admittedly, this is just a single incident, but from where I’m standing, even if Geoff’s ride brings hope to just a single person, then it was worthwhile!

It is with great sadness that I must report that, Geoff’s wife Debbie contacted me to say Geoff’s cancer had returned and that he died suddenly in October 2018. She explained that in true Geoff style, he fought to the bitter end and, as a final mark of his determination not to let his illness define or control him, he had continued to visit the gym until his last days and insisted on walking to hospital the day he was admitted.