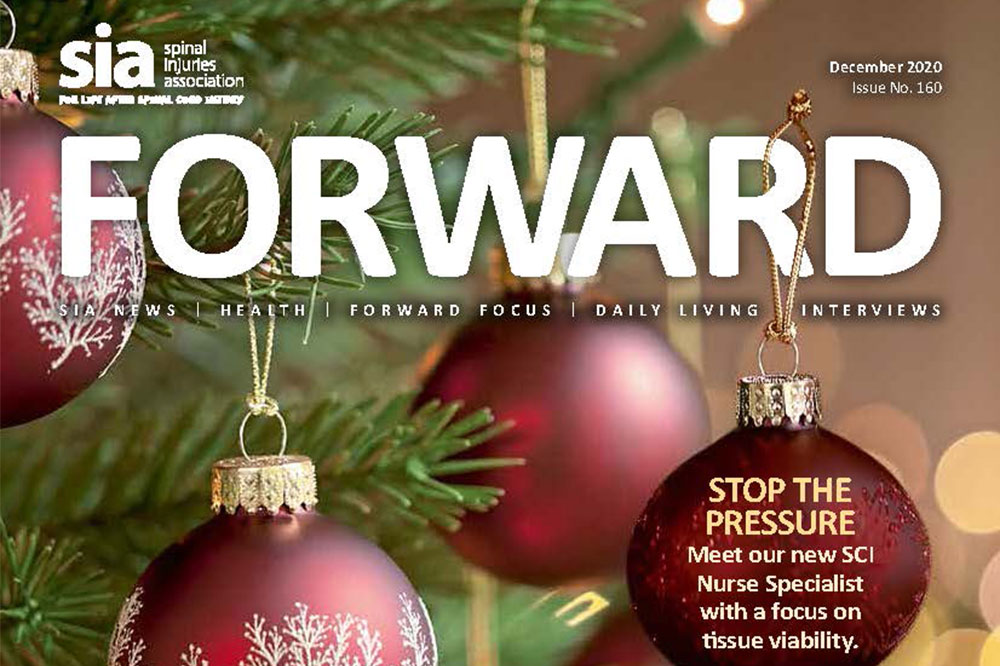 Our Writer, Researcher and Editor of Tidings, Dr Richard Biddle, recently wrote an article which was featured in ‘Forward‘  Magazine, the Spinal Injury Association’s bi-monthly publication. View the PDF here or read the article below.

Finding the bowel management routine that works best for you post-injury is crucial. Surgery is just one of many options. Here Colostomy UK shares one person’s experience of their chosen solution.

I’m sure many readers will know what a stoma is but, for those that don’t, let me explain. A stoma is a surgically created opening in the abdomen, used to divert bodily waste so that it can be collected in a bag. There are three main types of stoma: colostomy (large bowel); ileostomy (small intestine); urostomy (bladder). Stoma surgery is used in the treatment of many illnesses, including bowel cancer and Crohn’s disease. It is also sometimes necessary following abdominal trauma such as that caused in an accident or during childbirth. Sadly, general ignorance about stomas has negative consequences for those with one. ‘Colostomy’ is still understood by many as an ‘old’ person thing.

Stomas are a favourite with comedians too: colostomy, it’s not my bag! This is not just unhelpful, but plain wrong too. People of all ages (including babies) have stoma surgery. These people are known collectively as ostomates. At Colostomy UK we have been supporting ostomates for over half a century. In this time, we have learned that stomas don’t just save lives, they enrich them. They can release people from years of suffering with chronic illness. Dave Thraves’ story reveals just what a game-changer having a stoma can be.

Back in 1992, when he was on holiday in Majorca, Dave was involved in a serious diving accident. The spinal cord injury he sustained left him paralysed from the neck down. He was 27 years old at the time, a company director, engaged to be married and living in his own home. An air ambulance was chartered to bring him back to the UK. After a couple of weeks in intensive care, Dave was moved to The Duke of Cornwall Spinal Treatment Centre at Odstock, where he stayed for 12 months. This was followed by two years in a nursing home. While Dave was there his house was sold and a new one found, which was converted to accommodate his needs. With the help of carers, he was then able to regain some control and independence in his life.

Because of Dave’s injuries, he was unable to carry out his own bowel care. In the spinal unit, glycerine suppositories and a gloved lubricated finger were used. The member of staff then checked his rectum was empty before moving him to the shower. In all, toileting and showering took approximately one-and-a-half hours, most of which Dave spent sat in his shower chair. A similar routine continued during his stay in the care home and then latterly when he moved back home. Dave quickly learned that his overall level of comfort (both during and after the routine) depended on who was doing it and factors such as his diet and water intake.

At first Dave experienced few problems, apart from the constant trouble caused by a small pressure ulcer in the gluteal fold (where thigh meets buttocks), which he developed during his hospital stay. However, as the years went by, bowel and connected problems started to emerge. Despite careful professional management, countless days, weeks and months of bedrest, alterations to his electric wheelchair, pressure-relieving cushions and an air mattress, his pressure ulcer refused to heal. He also started to suffer from haemorrhoids and autonomic dysreflexia. The latter is a syndrome that affects people with an SCI at the T6 level or higher and can be triggered by bowel issues.

Its symptoms include the sudden onset of high blood pressure and a pounding headache. It is potentially life-threatening. All these issues were unpleasant and at times barely tolerable, but the thing Dave struggled with most, was his bowels would occasionally re-open when he was in the shower. As you can imagine, he found this very embarrassing. It was the indignity of this that eventually pushed him to seek an alternative form of bowel care. With his team at the spinal unit in agreement, a referral to the colorectal department at Salisbury General was made.

Following a thorough examination by the colorectal consultant, Dave was advised that he had two choices: either continue with his current bowel care routine (and associated problems) or have a colostomy. Although he hadn’t really thought much about colostomies and it certainly wasn’t something that had ever been discussed at the time of his accident, Dave could see more merit in this solution, than maintaining the status quo. Tending towards stoma surgery, Dave’s decision to proceed was encouraged further by the findings of some pressure mapping, which revealed high readings in the gluteal fold area of his body. Hence, after two decades of managing under his current regime of bowel care, Dave gave the green light for stoma surgery.

Dave had his colostomy formed in November 2015. Post-op it took about a week for his blood pressure to settle. He thinks this was largely down to the effects of autonomic dysreflexia as, once on the correct medication, the situation rapidly improved. Within a matter of weeks everything else settled and Dave quickly began to experience the benefits of having a stoma. To begin with, it cut the time he needed to spend sitting in his shower chair by three quarters. The knock-on effect of less time sitting, was that within six weeks of his surgery, the pressure sore had all but disappeared.

This marked an end to what Dave describes as “the loathsome bed-rest that had blighted my mobility for so many years”. Dave’s dignity was restored as unwelcome bowel movements in the shower became a thing of the past. Yet more benefits became evident in the months that followed. The autonomic dysreflexia that had troubled him for many years disappeared, and with it all the associated symptoms. The anxiety that had previously accompanied changes in carers dissipated. As Dave said: “Training someone to change a colostomy bag is infinitely easier than training someone to use suppositories and digital stimulation.”

Less obvious benefits became apparent over the fullness of time. The end of bed-rest meant invites out no longer needed to be declined with the same regularity. Dave’s quicker, simplified morning routine left him with more time to do other things. When organising holidays with friends and family or overnight stays, less consideration had to be given to toilet facilities, as these no longer needed to accommodate a shower chair. Quite literally, with a stoma the world became a bigger place for Dave, presenting opportunities that haven’t existed since that fateful day in 1992. The changes to Dave’s life had and continue to have positive implications for people connected with him and close to him.

When I spoke to Dave this summer, he was rapidly approaching five years with a stoma and he is in absolutely no doubt that it has changed his life for the better. The morning pain and discomfort that once spoilt and blurred his daily living is now much reduced. Although he still suffers root pain, a form of pain associated with his SCI, the bowel problems have gone; no longer does he have to contend with both. Dave talks in terms of his colostomy being a revelation, something that has liberated him. In fact, he is so sure of this that he has become something of a stoma crusader. Together with Michelle, a Stoma Care Nurse at Salisbury District Hospital, he now gives talks at the spinal unit to newly injured people about bowel care options, most notably living with a colostomy!

I hope you have found Dave’s story interesting. At Colostomy UK we don’t just support ostomates, we also campaign to raise awareness about stomas. It’s thanks to people like Dave sharing their stories, that we are able to do this and at the same time dispel some of the damaging myths that surround them.