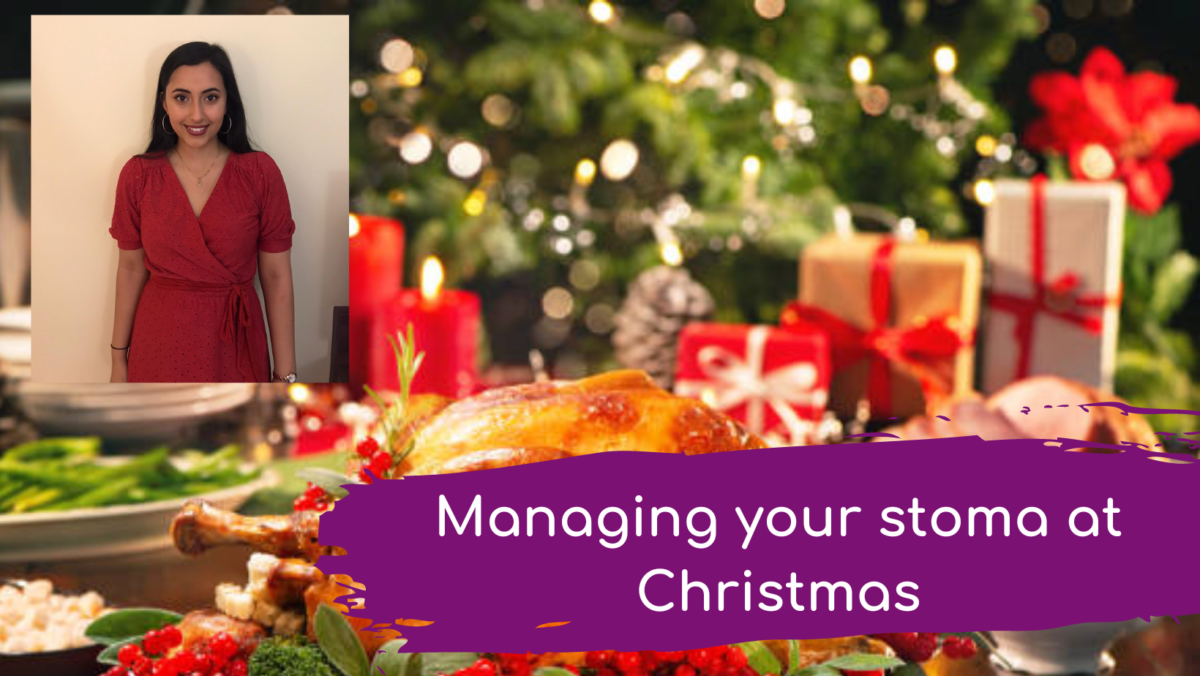 It can be difficult to know how to manage your stoma during the Christmas period. The festive break brings with it changes to daily routines which can affect stoma function.

You may eat more and indulge in foods which are richer than normal. Meal patterns may also be irregular (such as from snacking more). When food intake increases, stoma output can increase. Different foods will also have different effects on the consistency of the stools that are produced. Foods that are high in fibre stimulate the gut and may produce more wind and looser stools as the waste passes through the gut much quicker, giving less time for the water to be reabsorbed (Lomer 2014). Some of the high fibre foods which are often consumed at Christmas include dried fruits, mince pies, nuts, and vegetables including cauliflower and brussels sprouts.

It is therefore a good idea to keep an eye on how many mince pies, dried fruit and nuts you consume, and how much Christmas pudding you have, aiming to have these foods in moderation. The increase in fibre can lead to needing to empty your stoma pouch more often in a 24-hour period.  It is important to monitor your stoma to ensure it has not become high output. A high output stoma is when the small bowel output causes water, sodium and often magnesium levels to decrease. This tends to occur when the output is >1.5-2L in a 24-hour period, though this varies according to the quantity of food and drink consumed (Nightingale 2022). Symptoms of low sodium levels include lethargy and confusion, while low magnesium levels can lead to bad headaches.

Generally, people with a stoma can eat most foods in moderation, as long as the food is chewed well to support the digestion process (Cuerda 2021). But at Christmas, it’s important to recognise that your stoma output may also be increased by having a lot of richer, higher fibre foods more often and in a shorter timeframe. If you are new to having a stoma it is advisable when introducing a new food to your diet to have a small portion initially such as one to two tablespoons to see what impact it has on stoma function. People vary in how they tolerate different foods and in what amounts, so you may find you can eat a handful of dried fruit with minimal issues but another person with a stoma cannot.

Certain foods may impact stoma output and function more, for example brussels sprouts are known for increasing wind and odour, other vegetables that may also have this effect are cauliflower, cabbage and broccoli. Additionally, drinks such as alcohol can also have an impact, especially gassy drinks such as beer and lager which can cause wind and lead to a looser stool output. Alongside alcohol, fizzy drinks can also impact your stoma by increasing the amount of wind passed into your pouch. To reduce this, it is recommended that you limit your intake of fizzy drinks and when drinking them let the drink stand for 10 minutes to allow some of the gas to escape. Hydration is important in managing a stoma output too. Along with the other benefits of staying hydrated, drinking enough fluids also helps to support bowel motions. It is recommended to aim for around 1500mls of fluid a day. When well hydrated urine should appear pale yellow. (To read more about stomas and hydration, see Tidings winter 2021. You can download this on the Colostomy UK website).

Top Tips during the festive period

Alongside changes in food and drink, there can also be increased stress during the festive period. It is important to note that stress and anxiety can affect stool output. If you want to read more about the interplay between stress and your brain and your gut/digestion, then just google the ‘gut-brain axis’. Therefore, it is worth considering how to reduce the impact of stress such as through meditation, yoga, and listening to calming audio.

If you have any concerns or issues about your stoma during the festive period, then contact your healthcare professional/dietitian.