Babies with a stoma: Harry’s Story 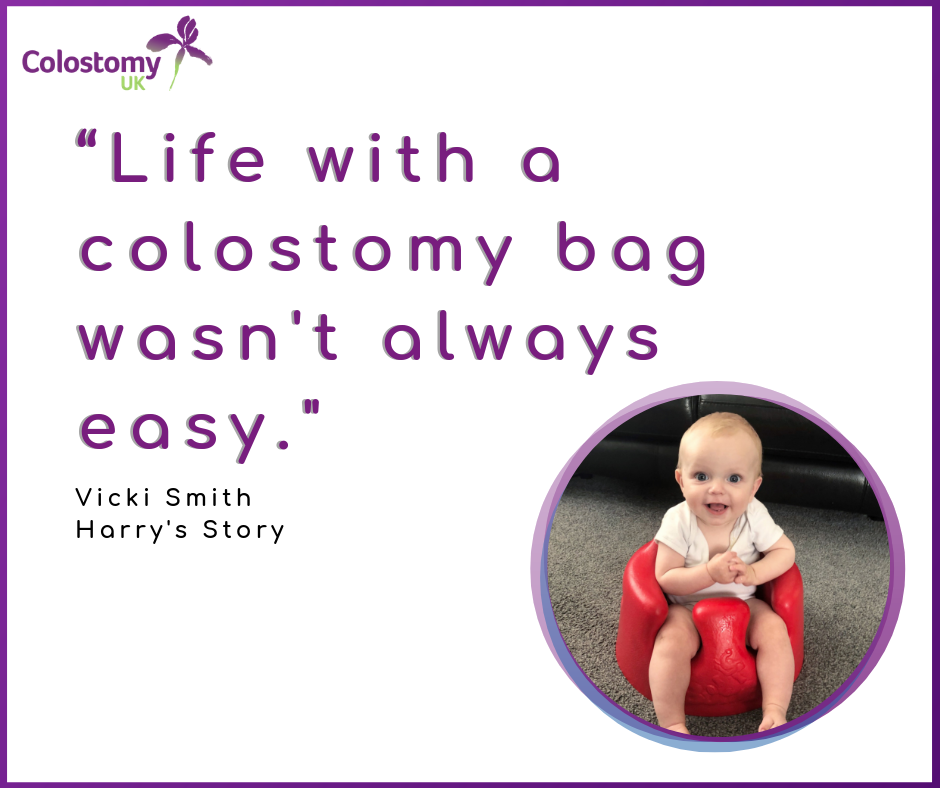 Harry was born in York Hospital, on 6th February 2018, following an otherwise healthy pregnancy. We were overjoyed to welcome him as our second child, but within 48 hours, we knew something wasn’t quite right.

Soon after he was born Harry passed meconium (the dark tar-like poo that healthy babies pass after birth) and that is what made his eventual diagnosis even more surprising to doctors. He did, however, spend a lot of time sleeping and was disinterested in feeding. The small feeds he did manage, he brought back up, so on Day 2 he was transferred to the Special Care Baby Unit (SCBU).

His abdomen was distended and an x-ray showed free air in his bowel. Unfortunately, York hospital did not have the specialist doctors they felt were required to help diagnose his condition. Therefore, on Day 4, EMBRACE – the Yorkshire and Humber round-the-clock transport service for critically ill infants and children – transferred Harry and me to Hull Royal Infirmary, 40 miles away.

Harry was admitted on to the Neonatal Intensive Care Unit (NICU). As he was having problems feeding the doctors decided to pass a nasogastric tube in to his stomach, and to provide the required fluids intravenously. His consultant paediatric surgeon informed us that she suspected he had a condition called ‘Hirschsprung’s Disease’.

Hirschsprung’s Disease is a rare condition that causes faeces to become stuck in the bowel. The nerves that control the movement to push faeces through the bowel, are missing from a section in the lower bowel. One of the main signs of Hirschsprung’s Disease is failure to pass meconium following birth. Given that Harry had passed meconium, doctors hadn’t initially considered this diagnosis. However, not feeding well, intolerance to feeds, distended abdomen and failure to consistently pass faeces, were all pointing towards Hirschsprung’s Disease. In order to diagnose this condition, a sample of tissue is taken from the bowel and a histopathologist has to determine whether there are nerves present. These nerves are also known as ‘ganglion cells’.

A suction biopsy was carried out by Harry’s consultant and we had to wait 48 hours for the results. When we got the results, they were inconclusive and his biopsy had to be repeated. Again, we waited for 48 hours. The results showed ‘immature ganglion cells’.

Harry’s consultant wasn’t happy with the results from the biopsy and she requested a barium x-ray. This showed what was described as a ‘typical Hirschsprung’s diseased bowel’ and it was clear to see that there was an obstruction of faeces in Harry’s bowel. However, barium x-rays alone cannot diagnose Hirschsprung’s Disease; it has to be proven through biopsies and analysis by a histopathologist.

Harry was managing to pass some faeces whilst in NICU and he had begun to tolerate feeds. After 10 days, we were finally allowed to take him home. Unfortunately, within 36 hours we had to return, as Harry had failed to pass faeces and was in terrible pain. His consultant gave him an enema and we were sent home. This became a frequent occurrence until Harry was five weeks old, when his consultant decided to do a ‘full thickness biopsy’ under general anaesthetic. A full thickness biopsy is different to a suction biopsy, as it takes samples from deeper and further in to the bowel. The results, however, were inconclusive and we were sent home.

Harry continued to have problems passing faeces and when he was six weeks old his consultant made the decision to create a colostomy. During the operation, they took frozen cell samples from his bowel. The frozen cell samples finally confirmed that Harry did not have ganglion cells in his rectosigmoid colon and that he had Hirschsprung’s Disease.

Once the colostomy had been created, Harry went on to thrive. We were told that his colostomy would be reversed when he was ten weeks old and the section of bowel that didn’t have ganglion cells, would be removed. They would then bring the remaining functioning bowel back down to his rectum and re-join it.

Life with a colostomy bag wasn’t always easy. Before Harry had his operation, I was given a doll with a fake stoma to practise putting on a bag. While he was in hospital, I only changed his bag once and then we were sent on our way.  Over time I became more confident and a dab hand at changing his bag. We used Salts neonatal bags until Harry was four months old then changed to a bigger bag as he grew. We were relatively lucky in relation to leaks, but we did experience a few!

I sought help from members on the Colostomy UK Support Group page on Facebook. I shared Harry’s story and the members fell in love with Harry and gave me the support I needed to help me through a difficult time. I asked for advice when we experienced a spate of his bag leaking continuously and when Harry suffered from trapped wind. What members on this page don’t know about coping with stomas isn’t worth knowing! I also met other mums whose children have stomas. I helped out one lady who had been left in the lurch without any neonatal bags for her baby.

Harry had his colostomy reversed and his bowel resected when he was six months old. He is continuing to do well and we will be celebrating his first birthday next month. I will remain on the Colostomy UK Support Group page on Facebook, as I’ve made some good friends through the group and everyone loves to see his progress.