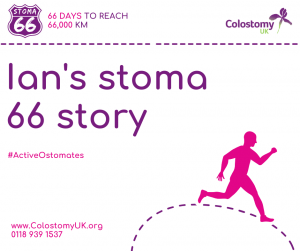 Ian tells us about recovering from surgery and the positive impact stoma 66 has had on his life.

Two of us took part, myself and my angel of a wife. Only a few people know of my predicament. I’m not embarrassed or ashamed in anyway, I just try to get on with the cards I’m dealt.

I reckon that there will come a day when someone I know will be going through the same type of thing, and I’ll be able to surprise them and sort of say – hey – normal living is absolutely possible. The best thing they can say is, “I had no idea”.

My surprise emergency operation following a perforated bowel (plus sepsis and kidney problems) took place in May this year. Diverticulitis has been mentioned, I was well and truly blocked. Things hadn’t been easy for a year or so. I probably wasn’t the most helpful patient, so I have no criticism. I’ve been a very lucky man. Firstly, I didn’t have to worry about having a colostomy as I woke up in intensive care and like it or not, I had one.

I haven’t, so far, had too many problems. I overdosed on spicy food one week which was interesting. But no serious disasters to date. I’m also lucky in the sense that I am retired and my stoma seems very regular. The ‘main event’ takes place within an hour or two of getting up, so if we do plan on going out for the day, the alarm gets set for an hour earlier than necessary.

The recovery from the, so I am told, “complex and quite major operation” has been testing my patience, but this is where the stoma 66 challenge has been so helpful. From where I was in September I thought 50 miles would be good. In fact I did double that. I’ve gone back to the gym  and I now visit twice a week, and am starting to work on my stamina. Hills are still a huge problem for me. I think the sepsis may be having had a longer lasting effect than the stoma. But I’m also back volunteering as a gardener at a local famous house!

One of my major surgical wounds only healed completely on 31st October so this is now only my 2nd week clear from any medical appointments. Quite early days I guess.

One of the strangest things that happened was a huge problem with handwriting which I found very difficult, so I avoided it. However, only when I was completing the paperwork for the challenge last night did I realise that my writing was back to normal again!

The positive messages i have got from Colostomy UK have been a great help to me.

People have been so helpful from the paramedic who first came and recognised sepsis on 21st May, to Becky the nurse in my GP surgery who said, on October 31st, “it’s healed – we’re going to miss you.”

The intensive care team, the surgeons, the staff on the surgical ward, the local Stoma team, the community nurses, & even the unwitting postal service have been faultless.

Hundreds of thousands of pounds has been invested in saving my life and I’m not going to get an invoice.

I am so very lucky and so very grateful.

A final thank you to colostomy UK and all their volunteers. On May 21st I had no idea you existed and now you are there like a huge safety net. That is so important and reassuring.”