It’s been a long journey for Ryan Owens in more ways than one, but on May 22nd he’ll finally make his Team Colostomy UK debut! 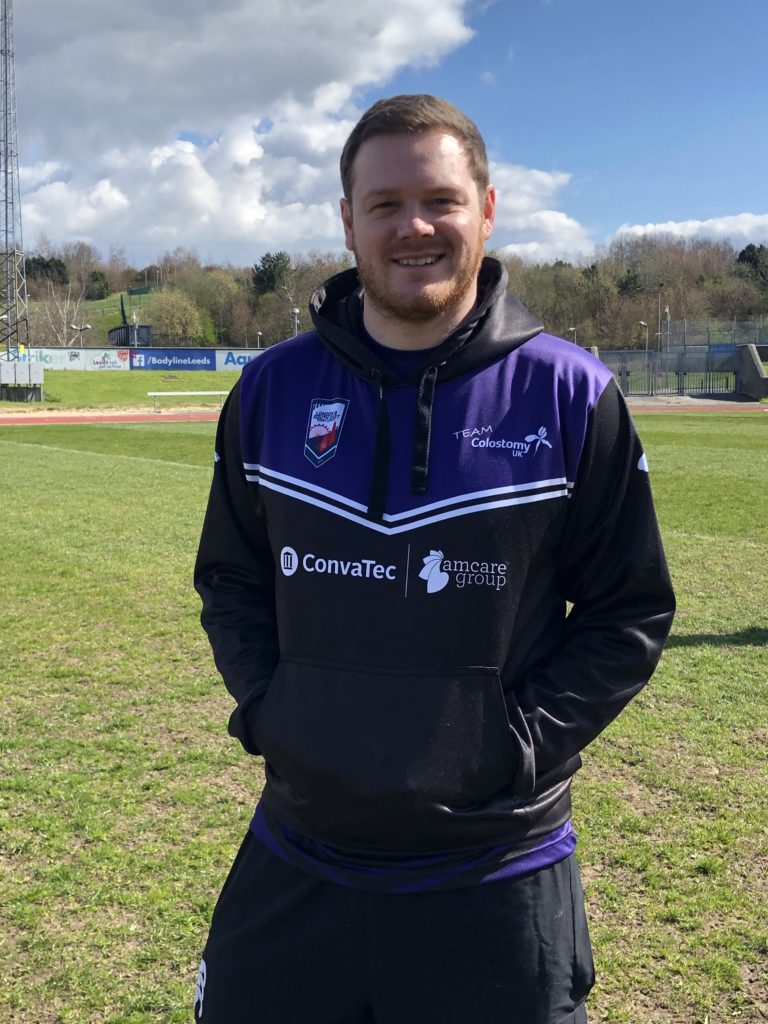 “I’ve played rugby union since I had a taster session with my local school at the age of ten. Since then it has been my main sport playing for Peterborough RUFC and Oundle as well as at school. Many of my friends growing up came from playing rugby.

I went to university at Sheffield Hallam and dabbled in Rugby there too but by this time my priorities had  changed and I ended up only playing one season. I still played some touch rugby tournaments when I returned home but cricket became a bigger focus.

After finishing University I moved in with my now wife, Kat, in Leeds. In early 2015 after a holiday to Canada I fell ill with suspected E.coli. After a month of feeling very unwell with a constant need to go to the toilet I went to my local GP who by chance had a condition called ulcerative colitis, and as he had the same symptoms I was suffering with he suspected that I had it too. He told me that it would be a long road ahead to get diagnosed and an appropriate treatment plan, but started me early on prednisone and mesalazine.

During this time I was working at a major coffee chain and I’m thankful I did as I had a toilet in hand throughout the day. As my symptoms worsened I was in the shop at 0600 hours and had been to the toilet up to 12 times by lunch time, each time with a sudden urgency and panic that if I didn’t go right then and there it was a string possibility I would mess myself. As a 25 year old that was pretty touch to deal with. I had always been active and at this time was still cycling to work as Kat was borrowing my car to get to work. We ended up having to buy a second car as the fatigue, general feeling of being unwell and risk of messing myself going over a speed bump too quickly was too much to handle cycling every day.

I had an emergency trip to the hospital in May after nearly collapsing at work. The aforementioned GP was a blessing, he told me to ring him if I ever needed anything and even rang me out of the blue at times to check up on me. Dr Chauhan if you ever read this, thank you for everything. They organised me a bed on the SSU at St James to prevent me having to wait in A&E. I had raised levels in my liver and was told I may have Hepatitis before leaving to do more tests, leaving me to ponder where on earth I could have contracted it from. A short time later they came back and told me it wasn’t hepatitis and discharged me with a high dose of prednisolone again.

Around August I was still flaring, and had been since the February that I started showing symptoms. That’s a long time to be in a constant flare and it was taking its toll on me. My consultant told me to stop working to focus on treatment but I felt better when at work. I was distracted and kept busy, if I stayed at home I felt worse and ended up spending most of the day on the toilet.

At this time I was moved on to azathioprine which was sold to me as the best thing to get me out of a flare. A couple of days later I went on a weekend getaway with some friends and ended up being on the toilet more than normal. I was unfortunately allergic to azathioprine and was taken back off it a week later.

I was offered to go on a clinical trial on something called imfliximab. This was a biological tranfusion done once a month and everyone I spoke to in the wars said they felt amazing after and it gave them their life back. I had no reaction to the first one which they weren’t concerned about but told me if I had no reaction to the second then it wouldn’t work at all. It didn’t work…

Late October time the pain in my abdomen become nearly too much to bare. I had to have another emergency GP appointment and was given tramadol to try and reduce the pain. I remember the car journey back as I was in so much pain I made Kat drive at a crawl over speedbumps on the way home as my abdomen was so painful.

A couple of days later at work I was still run down and in pain, I was very pale looking. One of my favourite regulars, Jackie Kilroy, took one look at me and matter of fatly told my I looked like s*** and to go home. I broke down in tears when she said this and called my consultant again asking for help. They told me to come straight to hospital.

When I arrived they told me that I was going to stay in hospital until I was better, whether medically or surgically. I was given my own room in the SSU again and pumped full of IV prednisolone to try and stop me flaring so badly. If it didn’t work over the weekend then the last option was surgery. I had to keep a toilet calendar so they could map my progress, but by the Monday there was no reduction.

In November I had my sub total colectomy surgery, nine months after first feeling ill and being in an indefinite flare. My surgeon, Mr Riyad, remarked that I would skip out of hospital when I leave, and after a couple of complications before leaving, I felt like I actually could (definitely couldn’t physically, abdomen was very painful from the surgery)

A couple of months after my surgery I was back at work and had a new lease of life. I had applied to the police before I fell ill and thankfully due to a backlog my application was delayed through all of the above troubles. I was given a start date in March 2017, there was no way I would have passed my medical without the surgery and the Dr had no concerns with me working with an ileostomy bag provided I wore a protector belt over it. This was the same belt my stoma nurse had suggested I use for sports and sleeping and the same type I still wear today. It straps around your waist and has a hole cut out so pull the bag through. A plastic ‘cap’ then goes over the bag to protect the stoma from any direct hits. I’ve been through a couple over the years but they’re a great bit of peace of mind and available for free on prescription!

Not long after started at work a colleague who lived locally if I played rugby as their local team needed players. I hadn’t played in a few years by this point but had wanted to start again and this was the sign. I really enjoyed being on the pitch again and to get my fitness back. Unfortunately I managed to fracture and dislocate my shoulder during my second season with my local team and have ongoing issues with it today. I am having physio for it and hope with Team Colostomy UK I can get back to playing at least some form of rugby!

I by chance came across Gio and the team at Colostomy UK whilst at work. They walked past me in matching t shirts and I stopped Gio to ~arrest~ ask him about their charity!  I’ve been signed up ever since and thanks to covid and the above mentioned shoulder I still haven’t made my debut, however my name is down for Batley 2022 and looking forward to getting 5 minutes on the pitch after standing on the side line for the last couple of matches.

I am currently healing from having the last of my large intestine and rectum removed in February, and looking forward to not having any further surgery looming over me. A big thank you to all I’ve mentioned above, a massive thank you to the NHS, without it I cannot imagine what my health or wallet would have looked like. Here’s to the future, bag and all.