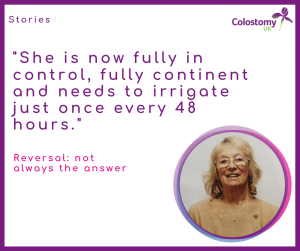 With surgical and medical advances meaning that stoma surgery is increasingly seen as a temporary measure, the subject of reversal surgery is set to remain topical for the foreseeable future. The outcome of reversal surgery often varies on the person and many people experience both ups and downs. What happens when there are more downs than ups and the result isn’t as expected? This is what happened to Sandra Willoughby who I spoke to recently.

The start of Sandra’s story will have a familiar ring for many ostomates. Towards the end of 2012 she started to notice blood when emptying her bowel. Her G.P. at the time diagnosed this as piles. The problem continued intermittently for the next 18 months, but came to a head one weekend when Sandra passed so much blood her daughter thought she should go straight to hospital. Sandra, however, resisted, as she didn’t feel that she was an emergency. Aware of the pressure A&E departments are under, she was determined to go through ‘the proper channels’; a view many of us will understand and sympathise with. Hence early the next week she booked an appointment at her local surgery, where she was seen by a young ‘no nonsense woman doctor’. This led to an urgent hospital referral. Although at this point, many people would have feared the worse, Sandra’s overriding emotion at the time was relief. Relief that something was finally being done to establish the cause of her problem and (hopefully) treat it.

The consultant did an internal examination and confirmed that he could feel a mass. Sandra then had blood tests and a colonoscopy, after which a diagnosis of stage three bowel cancer was confirmed. The only saving grace was that the consultant said ‘we can deal with it’. These words helped Sandra, a naturally positive person, to remain upbeat throughout the treatment that followed. This included radiotherapy pre-op and then chemotherapy after a laparoscopic lower anterior resection and temporary ileostomy was formed in February 2014. However, as you will see, Sandra’s positive outlook was soon to be sorely tested…

In February 2015 Sandra saw her consultant again where it was agreed to proceed with a reversal. Sandra left this meeting under the impression that normal bowel function would be restored. Sadly, the opposite occurred and post-op Sandra found she was unable to empty her bowel properly. The feeling that she needed to ‘go’ was with her constantly. In the nine months that followed Sandra became incontinent and her skin became very sore. The impact on her life was far-reaching. She lost two stone in weight and had to move into the second bedroom as she didn’t want to keep her husband awake all night. Sandra tried everything, from visiting her G.P., to altering her diet, to contacting various bowel charities, but nothing seemed to work. In the end Sandra reached the point where she was so desperate, she was prepared to try anything.

Luckily, before the reversal, Sandra had started to attend a stoma support group run by her stoma care nurse (SCN). And it was this that proved to be her salvation. Although the post reversal problems had placed considerable restrictions on Sandra’s ability (and confidence) to travel far from home, she still managed to attend the support group and the open day it periodically holds at St James Hospital, Leeds. It was here that she saw a demonstration of the Coloplast peristeen pump for anal irrigation. Sandra immediately spoke to her SCN as she thought it would be worth having a go with the system.  Her SCN agreed and took matter forward, as a prescription for the pump is required. Shortly afterwards Sandra was visited at home by a registered nurse from Peristeen, Charter Healthcare who demonstrated the pump to Sandra and taught her how to use it. Sandra remembers this visit very well, as it took her so long to irrigate on her own, the nurse had to leave for another appointment and then come back again! Since then Sandra has never looked back. Irrigation has, quite literally, solved her post-reversal problems. She is now fully in control, fully continent and needs to irrigate just once every 48 hours. Amongst other things this has meant she can travel abroad again, confident in the knowledge that no accidents will occur. As Sandra said, the pump even comes in a carry case that is ideal for travelling.

At Colostomy UK, we wouldn’t want Sandra’s story to put people off going ahead with a reversal. If you have had a reversal and are experiencing problems, then you shouldn’t hesitate to contact your medical team. If you would like to speak to someone that has had a reversal, then call our helpline 0800 328 4257 or e-mail us info@ColostomyUK.org and we will be happy to arrange this.