Home > News > Richard’s Stoma Story: we call ourselves the ‘Camemberts’

Richard’s Stoma Story: we call ourselves the ‘Camemberts’ 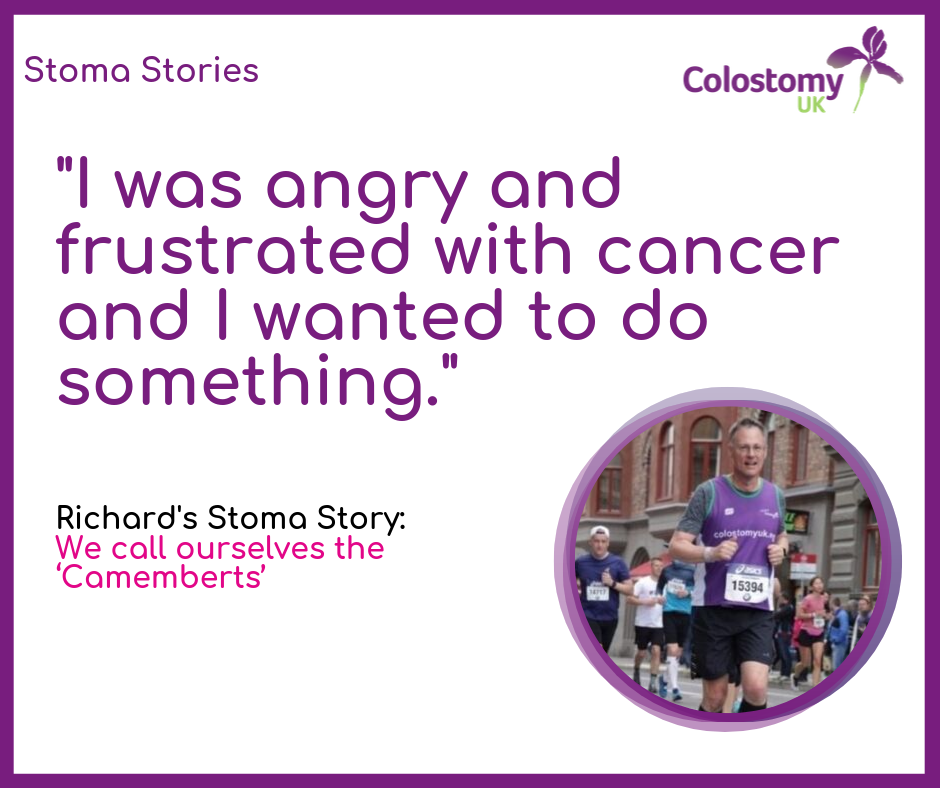 Back in June Richard Hubbard ran the Stockholm Marathon to raise funds for and awareness of Colostomy UK.

After raising an amazing £700 Richard was kind enough to explain the journey that led to him putting his body on the line for our charity.

“I decided to make my Marathon comeback while sitting on the train back from London to Nottingham on 7th December 2018. I had done one marathon before in London in 2004 and although I really enjoyed the day I had sworn never to run another one. Unusually for me I had bought a running magazine to read on the train, and in there was a marathon training programme that appealed to me. I thought to myself perhaps I can do this. My father was very much in my mind because he had recently been diagnosed with bowel cancer and surgery was planned. Earlier in 2018 my father-in-law had died from bowel cancer and a young friend of ours in her early teens had developed leukaemia. I was angry and frustrated with cancer and I wanted to do something. So, I decided it was time to make my comeback.

My wife is half Swedish and for this reason the Stockholm marathon on 1st of June seemed like a good choice. I started training around Christmas following the Hanson’s Programme that had been published in runner’s world – five runs a week and a lot of miles, but in this programme 16 miles is the longest run you do. It suited me well. Training for a spring marathon means lots of runs in the dark – either early in the morning before work or in the evening. We live in the country and so I became used to running over fields by moonlight and in the end this became one of my favourite light to run in.

In my village we have a great running group of 8-10 runners who run together 1-2 times a week. We call ourselves the “Camemberts” as we are mature, slightly runny and a bit smelly. I had great support from the group during my weekend training runs. Early on I had decided I wanted to raise some money for a Cancer Charity and asked my Dad what he thought. Without hesitation he said we should support Colostomy UK because they had been such a help to him both technically and emotionally in the run up to his surgery. The input he had from the nurses, together with the information from Colostomy UK, had a massive impact on reducing his fear.

For the non-athlete there are always “issues” along the way in marathon training. Early on I had a dodgy ankle, and later some ilio-tibial band problems (runner’s knee). With a few trips to the physio and osteopath I managed to keep training and really only missed a few runs, though I did need to cut back on some of my strength building interval runs. I was not altogether sure I was going to get round.

With excitement mounting we flew to Stockholm on the Thursday evening before the Saturday afternoon race. On the Friday we visited the Marathon Expo to collect my number and to do some gratuitous running shop shopping!

The race itself had a midday start which is late for a City Marathon and allowed for a hearty Swedish breakfast of yogurt, muesli, cheese and bread. Our hotel was near the start so it was an easy walk over with excitement growing as the crowd swelled approaching the start area. We had some good chats with local runners and other runners from the UK. The race attracts nearly 20,000 runners so it is not as big as London but still a sizeable City marathon. The organisation at the start, and actually at all times, was great. You get channelled through an attractive park area to your starting gate, and with a predicted race time of around 5 hours I was in the last but one pen.

The gun went at midday and we all stood still! Gradually people started to move and we eventually crossed the start line after 15 or so minutes. Stockholm is a very grand and dignified city and the early stages of the race sweep through some very elegant boulevards, and then down to the water front.

It was great to see my wife Amanda and her aunt Ulla early on in the race giving me a boost. We then headed out to the rather lovely Djurgården, which is the country park close to the city centre. Crowds were thin here but the running was relaxing and pleasant. At this point I was just trying to let the miles go by, and aiming to run just under 11 minutes per mile to try to get in just under 5 hours. The race then heads over the water to Gamla Stan – the old part of the City with the Grand Royal Palace, and then on to the next island Södermalm, an up and coming trendy part of town. Normally I would say Södermalm is one of my favourite places in Stockholm, with its great photography museum the Fotografiska and diverse restaurants – but I had forgotten that it is hilly! The first hill comes at 17 miles when you loop back from the water front up to the main town road – its long and steady and many stopped to walk but I managed to keep running slowly up it. Another shorter but sharper hill comes at 21 miles before the long uphill bridge section at 22 miles. I was pretty tired by this stage but had managed to keep my running splits going at 11 minute per mile. My wife had come down to Södermalm to support me and this gave me a massive boost.

The water stops along the way provided the usually water and sports drinks, and more unusually gerkins, vegetable stock and coffee. I stuck to water and energy bars. As we made our way along the water front at Strandvägen for the 3rd and final time I was feeling very tired but was keeping a rhythm going. My wife’s Aunt Connie had come in to town to support me and I spotted her and gave a weak wave but did not dare stop in case I could not get going again.

At 24 miles it all started to hurt a lot, and so I thought about my Dad and the other people I knew who had had such a tough year – I was not going to stop now! I continued grinding on slowly and worked out if I could just keep going at the same rate I would not break 5 hours but I would not be much outside this time. Then I remember looking at my watch at 25.5 miles and feeling exhausted and for the first time I had a walk. It felt like all of the lights had gone out in my body and I struggled to get going again. The race finishes in the glorious 1912 Olympic Stadium with a lap of the running track and I just about managed to get my legs going to run a slow lap and making it to the finish in 5 hours and 8 minutes. Amanda was waiting for me at the end and that was a great relief though I think she was a bit surprised to see me burst into tears. The medal and finishers t-shirt helped to ease the pain as I hobbled back to the hotel, looking forward to a hearty Swedish meal at Ulla’s apartment with family and friends. I phoned my mum and dad on the way to the hotel and also my three children to reassure them I had made it and was ok.

My reflections looking back now some 4 weeks after the event are that it was a hard but fun day, but thinking more deeply I remember feeling it was physically one of the hardest things I have ever done. I was more emotional than I expected and I had to dig deeper than I had anticipated – but I was so pleased to have completed the Marathon again. I am very grateful for all the support I have had from Amanda, my family and friends – I think some thought I was mad but they kept these thoughts to themselves! As I sit and reflect on it now I wonder would I do it again – and you know I think I might!

We’re really grateful to Richard and the many other people who raise funds and awareness for Colostomy UK each year.

If you’d like to take on a challenge for us, however big or small, then please contact Giovanni.cinque@colostomyuk.org or call 0118 939 1537 for more details. Get involved!