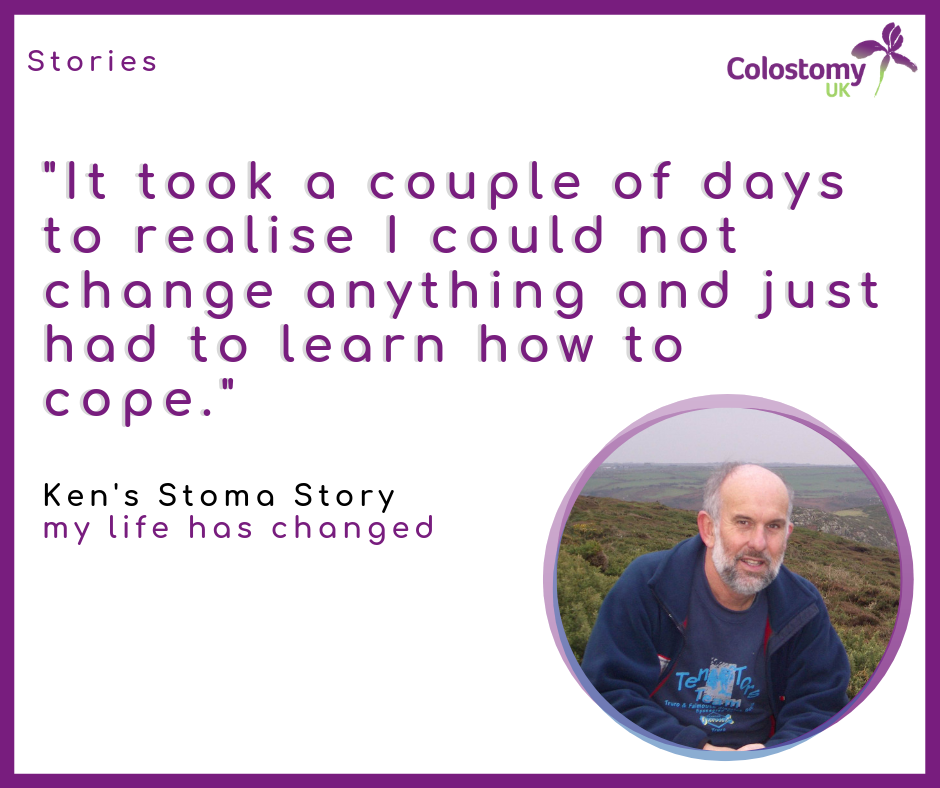 I went into hospital on August 2003 for a minor operation and came out with nothing having been done…The consultant stated that he had found something “he did not like.”  and so a few weeks later I was transferred to another consultant who informed me I had cancer of the colon. Like most people I went to pieces and it took a couple of days to realise I could not change anything and just had to learn how to cope.

I saw the future as bleak, having to face giving up all that I enjoyed. For many years I had been involved with lots of outdoor activities including the Scouts, Duke of Edinburgh’s Award (DofE) and the Ten Tors event held on Dartmoor each year.

My employers gave me a lot of help and support and allowed me to come and go as and when I felt well enough. I was running an Industrial DofE Group at my work place at the shipyard in Falmouth and decided that if I was unable to walk across the moors I could at least plan and direct the expeditions. For this reason I took my maps and navigational gear into hospital with me and worked on them until my operation. I spent 17 days in hospital over Christmas and hated every minute of it as I wasn’t used to lying in bed doing nothing. The hospital staff were great, but I was not the best of patients by a long way and it was a struggle to get home. Finally on New Year’s Eve I made it, determined the New Year would be a fresh start!

The next few weeks were hard on everyone as, despite their efforts, it took a long time to heal the operation scars and it was several weeks before I could eat anything. Food always smelled good but once I tasted it I could not eat it. A small gammon steak the size of a tea cake changed everything and once I started to get my appetite back I started enjoying food again.

The colostomy bag never proved to be a problem as for me I had no choice but to cope, so I did.

After six months at I home I returned to work again with a lot of help from my employers and with help from the workforce managed to lead the expedition to Dartmoor I had planned for the DofE group. I spent most of the time in the minibus and let others do the work, but it felt good to do something constructive. This effort was worth it as it resulted in 10 young people going to St James’s Palace to receive their award from the Duke of Edinburgh.

Over the last two years I had begun to get more involved in Scouting and DofE again and now had the time to take on an administrative role, running groups on expeditions. I had to balance what walking I was able to do by making sure that I walked only when I felt up to it and only reasonable distances.

My friends often walked with me enabling me to start to fill in the “spare” time I had with some constructive training for lots of young people. Since my retirement in 2007 I have managed to get involved in the Ten Tors event on Dartmoor again, but decided in 2013 (my 20th year) that it was time to back off as a leader, as the training takes place during the winter months.

I have trained and been an assessor for DofE for over 25 years and this has become a major part of my life. In this role I have completed hundreds of assessments on many expeditions on Dartmoor, Exmoor and all over Cornwall. I also undertook the role of County DofE Advisor for Cornwall with the Scout Association. With this role I travelled all over Cornwall setting up groups and it was very rewarding.

How do I cope with “my pouch” in the middle of Dartmoor and on expeditions? The answer is quite simple as it has proved to be no more difficult than at home. I change the pouch regularly and use a flushable bio degradable bag which I can bury or carry to the next suitable place for disposal. It sounds perfect but I have had my moments when things have gone wrong but, just as if I was at home, I have coped and got on with it. After all what choice do I have!

The weight of the rucksack was a problem but this was overcome by taking a close look at the type of equipment I carried and the way things were done. I now stay at a base camp, thus reducing the need to carry a tent etc. I now carry an emergency shelter instead. I no longer walk long distances (20km a day max) and plan my route in advance so it consists of short walks with car rides in between. I have also looked at the clothing I use and reduced this by using Paramo clothing which is waterproof but has built in zips to keep you cool in hot weather. I also use lightweight food which isn’t what I prefer, but it provides the energy I need until I find a suitable place to eat.

My life has changed from a time of worry and concern to one full of interest and positive thinking. It is a case of taking what you have and adapting it to make sure you use it to your full potential. From this you can find new interests and develop many of the things you did before and still perform a useful role in the community. As I watch my grandchildren grow I know how lucky I am to have had the support of my wife, friends and family.

Life is good, make the best of it and enjoy every day.