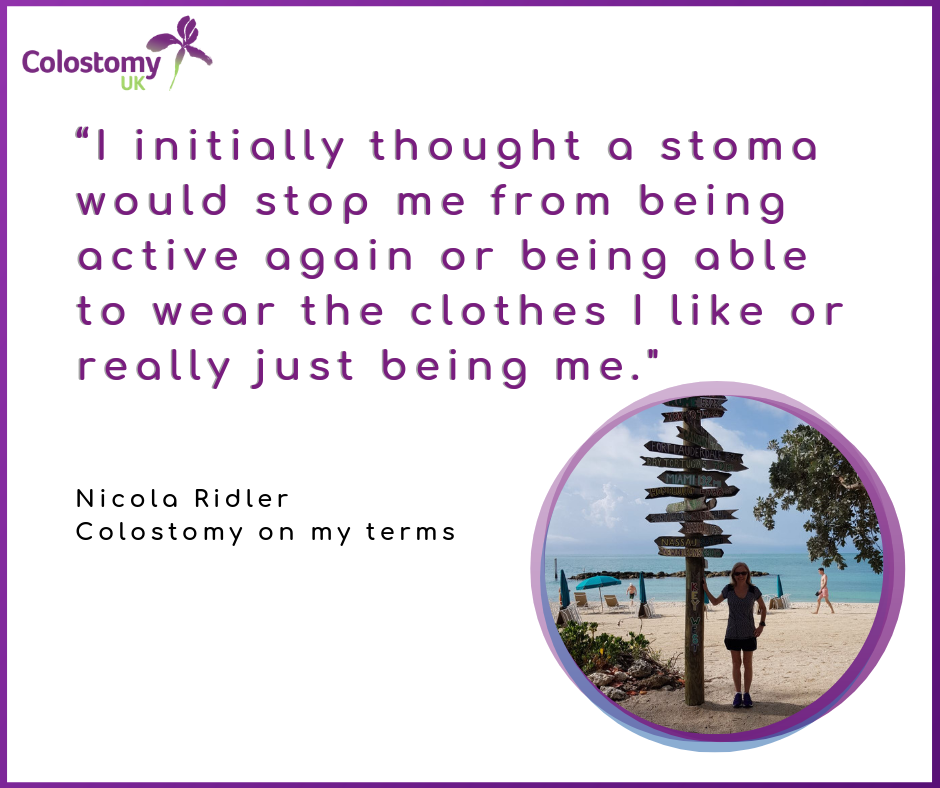 Most people think of colon or bowel cancer as an ‘old’ person’s disease, so you can imagine my shock when I was told that I had stage four bowel cancer with liver metastasis. It was like a sledgehammer to the heart. Although I had numerous doctors’ appointments in the lead up to this diagnosis, things were put down to IBS and food intolerances. How wrong this turned out to be. By the time I had my scan on the 14 August 2017, I was in a lot of pain. I was also needing to spend hours (if not days) on the toilet. When I did go out, worrying about the location of the nearest toilet was constantly at the back of my mind.

The consultant who reviewed my scan called and asked me to come back the same day to discuss the findings. It was suggested that the best route would be for me to have a colostomy the next day, followed by chemo, further operations, more chemo and more operations. I  was told that without the treatment I might have six months left, but having it didn’t come with any guarantee of a better outcome.

Now, you may think that making a decision at this point would have been easy. Surely surgery with just the possibility of living longer would be the only road to take? But for me this wasn’t the case. I couldn’t face the treatment as proposed, it was just not going to happen. Firstly, a colostomy – no way. I told my consultant I would rather be dead. Colostomies – they are definitely for old people (or so I thought at the time). At this point, ignorance led me to believe that having a colostomy was a life sentence. Even though my bowel was blocked and causing absolute agony I told him to think again, which he did. So off I went to have a stent inserted in my colon a few days later. They also took biopsies to confirm that the mass was a tumour.

Things went along swimmingly until December 2017. I remember getting back from work and having a bath then the pain started. It was like someone stabbing me in the guts, over and over again. My screams were so loud it really frightened my husband who called 999. I was rushed to hospital where it was confirmed I had a bowel perforation from another blockage. Again, I was faced with making a decision about having a colostomy. Again, I was told it was life or death. But I still couldn’t do it. It was still not an option for me, so I was given 24–hours to live and taken to the Marie Curie Hospice. For anyone who has never been in a hospice I have to say this is the most comforting and amazing place you could ever wish to spend your final days. But I wasn’t ready to quit so I fought back and like some kind of miracle I walked out of the hospice on the 29 December 2017. I had missed Christmas day but I was determined to see in the new year!

Fast forward to February 2018 and another blocked bowel and another stent, eating was so difficult, and the constant pain and toilet stops were getting way too much for me to bear. After a long hard think I decided that I was all out of options and if I wanted to live then I would have to take the colostomy route. I have to be honest, I found the prospect totally terrifying. But as I thought about it more, I came to realise that it was less terrifying than being given 24–hours to live or taken to a hospice and saying goodbye to all the people you love.

The only person I fully trusted was my consultant. Luckily for me, a cancellation meant that he and his team were available to do the operation. It happened on Valentine’s day 2018. While most people were thinking about roses and romantic dinners, I was walking up the Heartlands corridor with my suitcase and pillow. My daughter dropped me off. At my request I was on my own, thinking life as I knew it was finally over. The rest of that day is a blur, bar my memory of waking up from the anaesthetic. The pain was so bad I begged for morphine. At that moment I would have settled for a hammer to the head to make the pain go away! I remember thinking: “don’t touch the bag, don’t even think about it and definitely don’t look at it”. I’m not going to lie, I was absolutely terrified: lying in my hospital bed; the noise in the ward; my arms battered and bruised from all the drips and blood tests. I felt myself sinking into a very dark place and I hadn’t even attempted a bag change. I just couldn’t see a future or how I was ever going to cope.

The stoma nurse came around with a load of booklets, some supplies, and information about how I was going to have my supplies delivered. Nothing made any sense. Didn’t they see that I couldn’t do this? Obviously not, because within 24 hours I was up and told to get moving about. Getting out of bed was a challenge, even though I had had key hole surgery, the pain was intense. When Friday arrived it was time to leave. I really didn’t want to go home because in hospital I had the security of people around me. Managing on my own was something I just couldn’t comprehend in those early days. Eventually I had to deal with my bag. I didn’t want to but there was no choice. It was like a mission, it took ages just to get everything I needed in the one place, let alone changing the bag itself. But slowly I started to get more confident. Luckily for me I have the most amazing husband who took no notice of my tears and my constant refusal to move. He simply put my feet in my shoes, laced them up, dressed me up like an artic explorer and that’s when we started walking. To say I was slow is an understatement, we still laugh about those days now. Each day he set us a new target and by the end of a week I had made it half way round the block. I was very proud of myself.

Getting to grips with the bag became easier – yes it really does. After another check up with the stoma nurse I started to feel a lot more confident. It was still hard to comprehend that this was to be my life from now on, but as the days turned into weeks and the weeks turned into months, managing my stoma became second nature.

As a family we are very open about my colostomy. She also has a name, Beryl. I believe this has helped me to overcome the difficulties. I initially thought a stoma would stop me from being active again or being able to wear the clothes I like or really just being me. I am here to reassure you that yes it is scary, and yes there will be days when your stoma really gets on your nerves. Likewise you might not be able to eat the food you love without suffering afterwards, but that’s just trial and error. My advice is throw all of that aside because if I can, you can. Take back control of your toilet habits and start living the life you want to. Ok, you might need to be a bit more organised and buy a bigger handbag to carry your ‘to–go kit’ but it works. Having my colostomy was the best Valentine’s present I could ever have received, it’s a gift for life and has given me a life.

I now openly discuss and show people who are interested in my bag. I talk to them about what it means to have a colostomy. Most people have never seen one or know anything about them. That’s why we have to keep kicking this stigma into the long grass. If you are feeling overwhelmed then just stop, take a breath and start again. You will have bag leaks, you will have reactions to food, you will have days when you don’t think you can get through, but you can because there are always better days ahead. My colostomy has not stopped me from doing what I want, I have been on a number of holidays, been swimming, sunbathed in a bikini, dressed up and gone to a ball and carried on living, I mean really living.