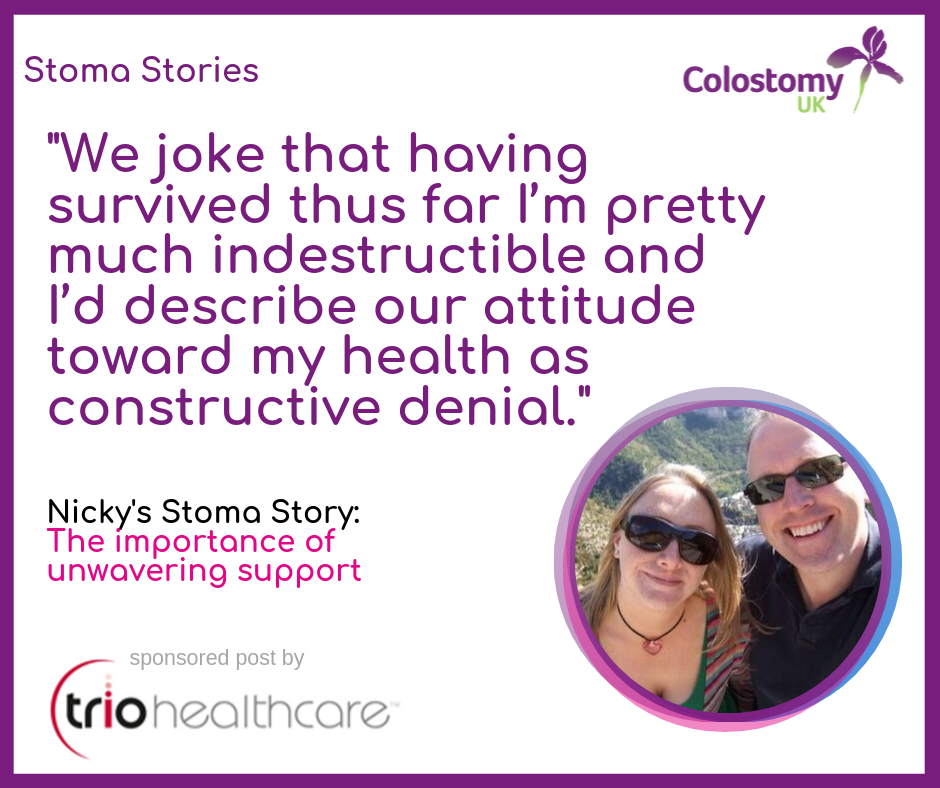 For the team at Trio Healthcare, the importance of sharing patient testimonials cannot be stressed enough. We feel that it’s vital for ostomates to know they aren’t alone in their journey and that there are others who have been through similar situations and dealt with similar issues.

Here we introduce you to the lovely Nicky who after being given a temporary stoma decided to forego a pouch and keep her ileostomy permanently.

“This spring I celebrate 20 years since I had my first stoma made, it may sound slightly odd that I will celebrate having to wear some of my insides on my outsides and a bag that no matter how hard I shop, I have yet to find shoes that truly coordinate with, let alone match. While the plan was for my stoma to be temporary, things didn’t quite work that way. Recovering from my first operation took two years, I’d been desperately sick with what was originally diagnosed as being ulcerative colitis (but much later was decided was also Crohn’s disease) and treatment for it. I was losing so much blood daily, rarely left the house and generally felt as if I was barely existing rather than living. Surgery had been described as a last resort but suddenly we were there, in the day room of the gastro surgical ward of my local DGH, sitting across from my lovely surgeon and his registrar as they told me there was a serious risk I may not survive the operation, but that we were out of options as we couldn’t control the blood loss or pain. I was on horrendous doses of steroids and cytotoxics and had all the side effects ( 7 stone weight gain!) but what seemed to be none of the benefits. I was scared but most of all I was exhausted. I just didn’t have any fight left and would have done anything to make it stop.”

“The result was just under 12 hours on the table, a drastic BP crash, my heart stopping and other complications. I don’t remember being in Recovery that time but I do remember being back on the ward, very fuzzy and muddled, and hearing my sister’s unbelievably dim boyfriend saying “oh no she’s got a catheter – they must have removed her bladder as well!” As you might imagine I was then WIDE awake. Husband removed said idiotic visitors and sat and held my hand and told me that things hadn’t gone to plan, but that I was alive, and so we could manage everything else. He’s been the most unwavering and incredible support; I’ve been so lucky to have him by my side through this. He’s been too bloody minded to let me die even when (some years after the first op) it looked so likely that relatives were being summoned to say goodbye. He just said very sternly “now is NOT your time, you are NOT going to die, you ARE going to recover from this, I’ve got you” so I did as I was told and somehow, I’m still here.”

“Many revisions, obstructions, kinks, twists and strictures later I am still here, as is my stoma, not exactly the same swollen strawberry I looked at with horror the first time my stoma nurse taught me to change my bag, having lost more gut with each op.

My stoma did change everything, I was so much better almost immediately, with the exception of the usual post-surgery extreme exhaustion. The bleeding stopped, we reduced my steroids, the pain was better, and I was on my way to the next surgery, where my pouch would be made. However, in those two years it took me to heal I really thought about my options, I considered the 1/3 conversation with my surgeon, that a third of patients would feel a pouch was an improvement, a third would feel it was no better or worse than it had been and a third would feel it was a detriment. I knew that having a stoma was something I could manage, because I was managing it. I knew that having another major surgery would take another age to recover from but not guarantee success. I didn’t like the look of the odds and now I knew what living with a stoma entailed, it felt less urgent that I maintain using my bum. So, I went back to my lovely surgeon and said I wanted my rectal stump gone and my stoma made permanent. He was surprised, went over all the potential problems and complications, not least that removing my stump would mean there would be no remaining tissue to internally secure a pouch to if I changed my mind. But it would mean none of the problems I was having with UC in my rectal stump, which was bleeding and ulcerated and very painful. I felt absolutely confident it was the right choice and so was put on the list.”

Moving forward with a permanent stoma

“After this operation I do remember recovery and my surgeon saying “I don’t know how you knew but you’ve probably just saved yourself a serious problem – the tissue we removed looked extremely sinister, had we waited much longer or you’d been less adamant about your choice then I think you’d be needing treatment for rectal cancer within months, and it could so easily have been missed.” I was woozy but pleased to have made the right call. The 18 years since having my ileostomy made terminal and permanent haven’t been easy. I’ve never been consistently well enough to return to work, I’ve had serious problems with scar tissue and pain, my stoma often sinks and either retracts or prolapses, my guts kink, twist and misbehave on a regular basis, I’m often on a liquid or mechanical soft diet, and our lives have been ruled by my health. But I do have a life, and I am so very grateful for that. I owe a debt of gratitude to my husband, family and friends, as well as all the medical and surgical staff who have kept me alive. We’ve travelled the world, cycling, walking and canoeing all over Europe. I’ve run numerous races to raise money for the St Mark’s Foundation, the research charity who are doing ground-breaking work to try and improve treatment for everyone with bowel disease, even managing an ultra-marathon a few years ago.

On the days I’m well, I’m so well it’s almost embarrassing and on the days I’m not then it’s the trusty combo of bed/hot water bottle/oramorph and patience. My good days are more frequent than the bad ones but only just. When an emergency comes the bad days often become bad months.  We joke that having survived thus far I’m pretty much indestructible and I’d describe our attitude toward my health as constructive denial. We don’t think about it more than we have to and we don’t dwell on what could have been. We aren’t parents and we would have loved to be. I don’t have the career I trained for or the one I longed for. We live a life of last-minute cancellations and letting friends down, of missed parties, theatre and events, so unpredictable is my health. We also live a life of spontaneous fun, of grabbing opportunities where we can and of treasuring the good days and imprinting happy memories on my brain so I can draw on them to get me through the next time things are tough.”

“Over the 20 years I’ve had a stoma very little has changed in terms of equipment or stoma care products. Then Trio Healthcare arrived and shook up the whole industry as far as I can see. At last products that not only work brilliantly (a no sting barrier wipe that actually doesn’t sting? A miracle!) but are packaged in a way that doesn’t make me feel a thousand years old and wouldn’t bother me at all if they fell out of my handbag or were on the bathroom shelf for all to see. The products don’t look overtly clinical but they are brilliantly effective, I’ve been impressed by everything I’ve tried from them. Their customer service is second to none and it’s really easy to order samples from them.”