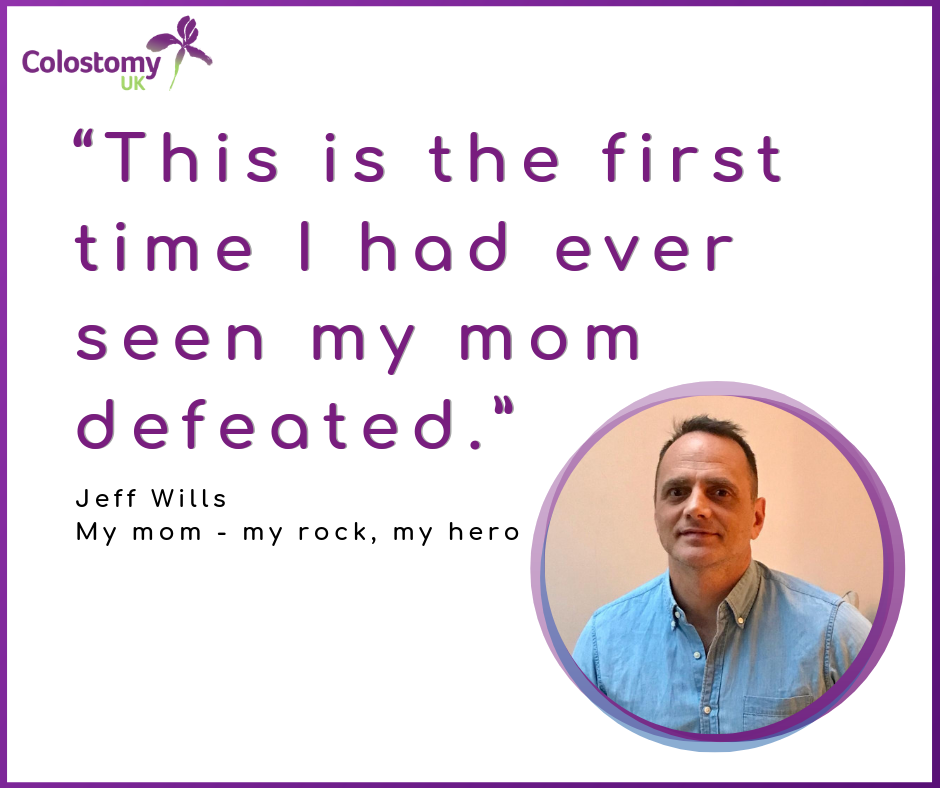 I use these words to describe my Mom, Connie Wills.  Ever since I can remember she has been someone I have looked up to. She has always been my biggest supporter, even when she didn’t fully agree with whatever crazy endeavour I was working on.  I have also seen her face numerous life-changing challenges, when many would just give up.  Not my Mom.  She has always had this ‘fight’ about her. It has saved her life on many occasions. It’s also because of her that I find myself working in a London hospital.

In the mid-80s Mom was diagnosed with Crohn’s disease. To be honest, I was too absorbed in my own teenage antics to understand that she was sick. It wasn’t until the early 90s when the Crohn’s attacked her liver and we were told she would need a liver transplant that I realized just how sick she was.  I was living in Los Angeles at the time and relocated back to St. Louis to be closer to her. It was six months of pure Hell for everyone, especially Mom.  Every time the phone rang I panicked thinking either a liver donor had been found or she had passed away.  Luckily, we were able to find a support group for people who were waiting for transplants or had one already.  This proved a great way for us to ask questions, express our fears and hear other people’s journeys. In 1995 Mom had her transplant and came through with flying colours. In fact, just a few months later she was back on the stage singing her heart out. During this period, she was lead singer of a rock n’ roll blues band.  It was an incredible night seeing her onstage such a short time after getting a new liver!

In 1999 Mom became sick again, this time with cirrhosis of the liver which had affected her kidneys too. She underwent a double transplant in 2000. Again, the fear of her dying took precedence over everything. With her fighting spirit she pulled through and was back on stage again in just a few months. Her passion for life and her drive was (and still is) an inspiration to friends and family alike. It has also helped countless others as her story has been displayed in the transplant section of the Science Museum in St. Louis. After both surgeries, she went back to ‘normal’ life: sang with the band, travelled, went shopping etc.

But everything changed on 18 November 2010. I was living in London at the time, was newly married and had just started a new job, when I received the terrible news that Mom had been in a horrific car accident. I flew back home that day and when I got to the hospital found her in a medically induced coma. She stayed like this for several months.  At times they would bring her round and her hands would immediately go to where her transplant was.  We found out that she was in extreme pain and while in the coma her intestines were dying. Over the next two months she had 20 operations and most of her intestines removed.

One day the doctor came in and told her only the option was a stoma.  None of us really knew what this was. Mom was completely against the idea. All I cared about was her being alive so we would talk about it but still she refused.  Her reluctance continued until November 2011. It was only after being told she was going to die that she reluctantly decided to go ahead. When Mom woke up after surgery and looked at her stoma, wind came out with some stool. She screamed and cried.  This was the first time I had ever seen my Mom defeated.  I had to put my own feelings aside so I could reassure her that this was the best decision, she was alive and was going to be OK. I knew it was absolutely horrible for her. I felt helpless but had to do my best to stay positive for her. This was difficult because I still had no idea what her life would be like. If she could even have a life. I remember crying and praying that she would pass away in her sleep so she wouldn’t suffer any more.  Thankfully, those prayers were never answered.

After about a year Mom was finally released from the hospital.  Medically she was stable but now the emotional side took a turn for the worse.  Once she got home, she became even more depressed. She wouldn’t leave the bedroom let alone the house. She wouldn’t eat. She even started abusing her pain medication so she could sleep.  This was not my mom. I didn’t know who this person was.  I didn’t know how to be supportive so I just let her do what she wanted. At this time, I was flying back and forth between London and St. Louis. My work, marriage, finances and my own emotional stability started to suffer.  I was in constant fear of losing everything. I was riddled with guilt about being away from my husband or being away from my Mom. Luckily, I had the support of family and friends to get me through. Hiring a 24hr/day carer for Mom also alleviated some of the pressure on me and my brother.

Slowly, my Mom started to ‘return’, wanting to venture out of the house.  I heard she had been going to the grocery store and to a friend’s house. One visit around Xmas time, we went to do some shopping. We were in a crowded department store when all of a sudden, her bag started to leak badly. She was covered in faeces, it was all over the floor and the smell was terrible. People were crinkling their noses in disgust and making comments. I hate to say this but I was disgusted and embarrassed myself. I cry looking back on that now. There was my Mom, crying in shame in front of a crowd of people and I did nothing but think of myself.  Luckily my mom’s carer took her to the bathroom and cleaned her up. I just stood there and watched the one person who had always been there for me reach the lowest point of her life and did nothing.

That moment changed my life.  I became more involved in her care, learned how to empty/change her bags, helped her in her physical rehabilitation, worked on her diet and most importantly became the supportive son I needed to be. Since that terrible day, I have seen my mom change and take back her life, doing almost everything she did before. She has even got remarried.  SHE IS BACK!! My mom is my rock, my hero and my best friend.

This experience led me to change career a year ago, going from event marketing to nursing. By chance or fate, call it what you like, I am now working as a nursing assistant in an acute surgical gastro-intestinal unit at a London hospital. Every day I talk to patients and family members going through similar situations to what my mom and our family went through.  We have an amazing team of doctors and nurses who work on the medical side and do an incredible job teaching our patients how to manage their bags.  However, we are unable to teach them how to LIVE with one.

A few months ago I came up with the idea of starting a patient support group, bringing together people who are living with stomas and people who have just had stoma surgery. There was a sense of excitement when I contacted Colostomy UK, told them about my idea and I was informed that a young woman named Iffy was in the process of putting a similar group together at a nearby hospital. They thought it would be a fabulous idea to bring the two of us together. From the moment Iffy and I started talking on the phone about the work she had already done and her passion for this project, I knew I had met the perfect person to bring our joint vision to life.

The day of the first meeting was filled with excitement and trepidation…  Neither of us knew how it was going to turn out. Additionally, Iffy and I had never met face-to-face before. It was also the first time I had met anyone from Colostomy UK.  Of course there had been numerous emails and phone calls beforehand, but that’s never quite the same.  But from the moment we all met it was like we had known each other for years! The first support group meeting was incredible. Along with Iffy, myself, and Libby and Giovanni from Colostomy UK we were joined by personal trainers, dieticians and healthcare professionals and, most importantly, ostomates and their friends and families. Everyone shared a little of their experience. There was laughter, joy, hope and a few tears. Most of all there was a sense of unity and support.  It was an incredible experience seeing so many people come together and support one another.

Since then I have become more involved in the ‘life’ aspect of my patients’ recovery. I still get asked the same questions and hear the same fears and concerns, but now I feel more equipped to help them.  Before meeting Iffy, Colostomy UK and many other inspirational ostomates and their families, I only had my own experience to draw on and, as I’m sure you will agree, my experience was unique in many ways. That all changed when I walked into that first support group. I was no longer alone.

My Mom, my family and myself went through this journey alone. There was no support. With the help of Colostomy UK I have dedicated myself to help those who are beginning this journey: someone that listens; a shoulder to cry on; a caring person with an honest and positive message –letting people know they are not alone.