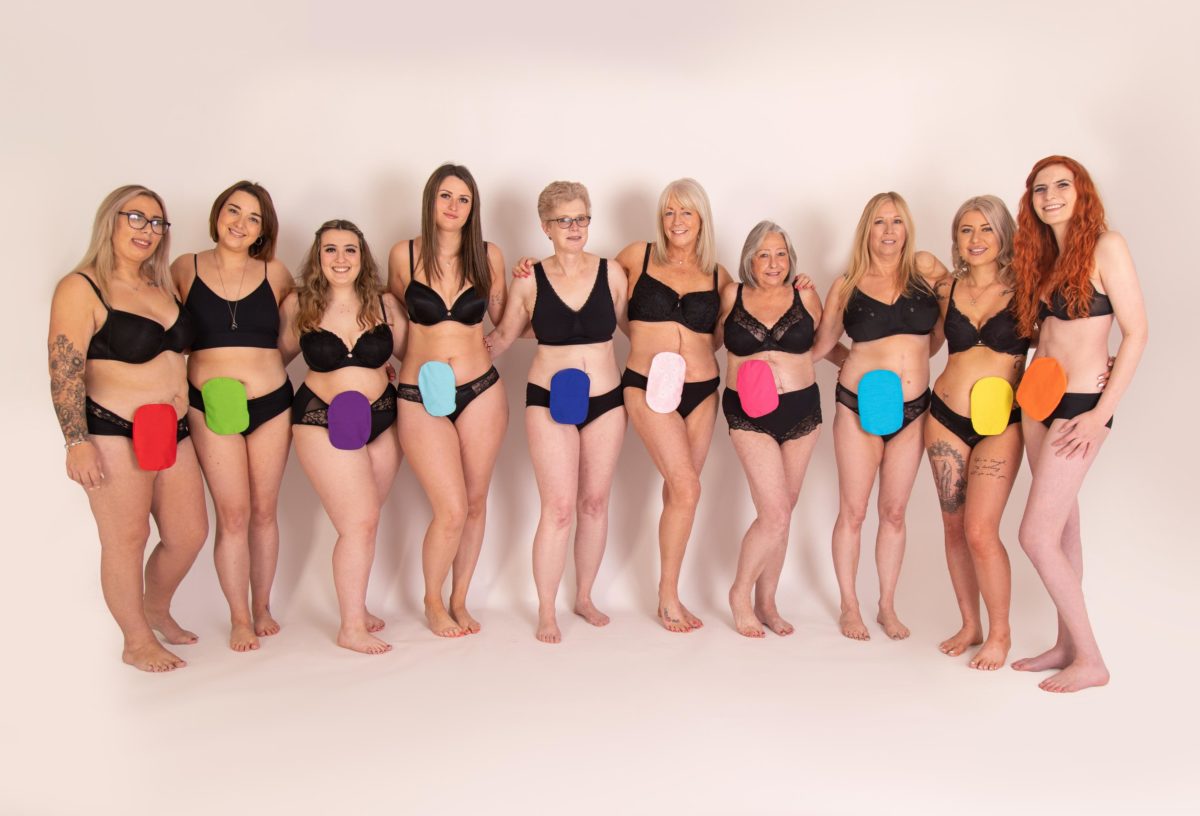 If you’ve been on social media or sat down and watched BBC Midlands Today over the last couple of days, you may well have come across the Stoma Squad.

The Stoma Squad are a group of amazing ladies. At different stages of their life after stoma surgery, they have come together to help tackle the stoma stigma and fundraise for Colostomy UK through a photoshoot where they proudly display their bags. You can donate to their page here: https://gofund.me/be441f30

We’d like to introduce you to the members of the squad and let them tell you a bit about themselves.

I suffered from very severe bladder and bowel incontinence due to having an auto-immune disease. In March 2020 I had a surgery called CLAM which helped resolve my bladder incontinence meaning I had to self-catheterize every 4 hours and as much as this made my life feel a lot more free and enjoyable I was still left with bowel incontinence which made day-to-day life very difficult.

Between myself and my bowel surgeon we decided to go ahead with stoma surgery, which I had in October 2021. After having my surgery and as I was adapting to a new way of life, I joined an online stoma support group where I quickly learned how many people, both men and women were suffering mentally with having a stoma and adapting to it . I also found that people couldn’t understand why I had or needed a stoma being so young and looking so ‘well’. I’ve regularly had to explain the numerous reasons people of all ages might need a stoma. There isn’t much information out there regarding stomas. This led me to the idea of a group photoshoot of people with stomas in the hope that others with stomas would see it and feel less alone and more comfortable in themselves. The hope too is that people in general will see it too and as a consequence won’t be as quick to judge others and not second guess why an apparently well person is using an accessible toilet.

I then put the idea on a support group and got a lot of interest. This ultimately led to me arranging a date with a lovely photographer and the start of a fundraiser where all donations go to Colostomy UK. I have made friends for life with the incredible women joining me in this shoot! Let’s break the stigma regarding stomas and start sharing more positivity. 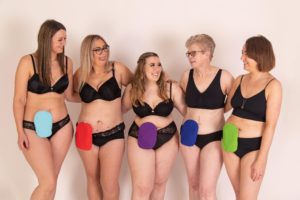 Hi, my name is Kayleigh. I’m 27, and I spent 10 years misdiagnosed, with GPs having me believe my illness was in my head. I was eventually diagnosed with Crohn’s disease, lost most of my intestines and gained a stoma! How you choose to react to your stoma is entirely up to you, but personally, it’s given me a life worth living and connected me to so many wonderful people. I want others to see the beauty in them that I do. After all, stomas save lives. Just remember, you’re not alone in this, we’re stronger together!

Hi, I’m Anna and I’m 22. I was diagnosed with Ulcerative Colitis in 2018 whilst studying at university and was given my stoma in 2020 after having emergency surgery. My stoma saved my life and I am forever grateful for it! I decided to do the photo shoot to meet other ostomates like myself and to raise awareness of stomas to show that not all illnesses are visible and younger people have stomas too. 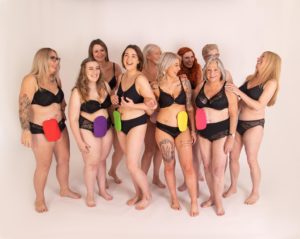 Hi I’m Emily and I’m 28. I got Ulcerative Colitis while pregnant. I spent a month in hospital and two years trying all the meds and barely eating or leaving the house. I had my ileostomy in lockdown after the pain got unbearable for me. I’m doing this photoshoot for my own self confidence as well as to spread awareness

Hello, I’m Catherine and I’m 64 years old. My story is a little different in that there was not actually anything wrong with my bowel.

In June 2021 I was diagnosed with retroperitoneal liposarcoma which is a rare form of cancer. I had a large tumour measuring 50cm by 25cm which weighed almost two stone. The only treatment was surgery. My surgery was undertaken on the 22nd July 2021 during which the whole tumour was removed along with my right kidney, my right ovary, and, in order to give clear margins to prevent the cancer spreading, part of my liver, bowel, intestine and muscle. When I was taken into recovery from surgery it was noticed that I was haemorrhaging so I was rushed back in for transfusions and to stop the bleed. The origin of the bleed was the bowel which had been caught and to stop the bleed a stoma was developed.

It was a shock to be told I had a stoma but am grateful that it saved my life.  I wanted to be part of the photo shoot and fundraising campaign to bring about awareness and that a stoma may be needed for a wide variety of reasons and at any age.

Hi, I’m Jan and I’m 65. I was taken to hospital for emergency surgery after having a twinge in my side, which turned out to be a Caecal tumour. This was removed, and an anastomosis performed. The surgery wasn’t successful, and I got sepsis.  I was then taken back to theatre a week later where I woke up having had an ileostomy which, to say the least, was a huge shock.  I was in ICU for a week with continued sepsis. It was a rough six weeks, but my stoma saved my life for which I am very grateful.  The stoma groups have got me through some tough times and doing this photoshoot will hopefully help others to see you can live a happy life once you get the hang of it. I’m eternally grateful to still be here and connected with others who totally understand. It will hopefully give others a different perspective, that there is life after stoma surgery!

Hello, I’m Gaynor and 56 years young. I had a slow bowel and had to have twelve laxatives a day. Then in 2015 I had a sub-total colectomy. In January 2018 I was going to the toilet between 10-20 times a day and could hardly leave the house. From February I had to work from home, then in September 2018 I had surgery for a Stoma to improve my quality of life. I spent a month in hospital and had to be tube fed. It took me a day to eat a jelly cola bottle! After ‘Shamira’ my Stoma was formed, I found I could eat anything and do anything again!  I am so grateful to have my life back and feel so lucky. When Jody told me I was going to be in the photoshoot I was truly honoured. I feel like I now have nine new friends each of which is so brave and inspirational and that we can achieve anything.

Hi I’m Jeanette and I’m 57. in 2020 I attended a routine bowel screening, where I was found to have multiple bowel polyps. With this and my family history, I was referred to the Familial Cancer Service, where following genetic testing I was diagnosed with AFAP (Attenuated Familial Adenomatous Polyposis) – an inherited condition where bowel polyps have the potential to develop into cancer, caused by an abnormality in the APC gene. To prevent this, I underwent a pan proctocolectomy and ileostomy in February 2021 where ‘Betsy’ my stoma was born.

Until this happened I had no idea of the variety of reasons why people have a stoma.   The screening has enabled me to be in control, albeit life changing when I had no obvious symptoms.

Hi, my name is Elizabeth, I was diagnosed with Ulcerative Colitis in 2019. After multiple hospital admissions and failed treatments, I had emergency surgery to remove my colon in 2020. I couldn’t wait as I wasn’t living my life. My stoma has given me opportunity to live a better quality of life. I wanted to do the photoshoot to raise awareness for fellow ostomates.

Hello, I’m Casey, I’m 30 years old. I was misdiagnosed all my teen years with IBS and finally had a correct diagnosis at 21 when I was pregnant. I had my first flare up during pregnancy and was treated with emergency care for me and unborn baby. I was in remission for seven years and had my second flare 2021. Medication did not help and had a lot of small bowel removed. It was either stoma or my life. We are strong, and I’m glad I had the chance to meet other brave women and for us to spread awareness.

We think the Stoma Squad are amazing and we’re really grateful for both the support they are giving us and for how they’ll inspire others facing their own journeys after stoma surgery.