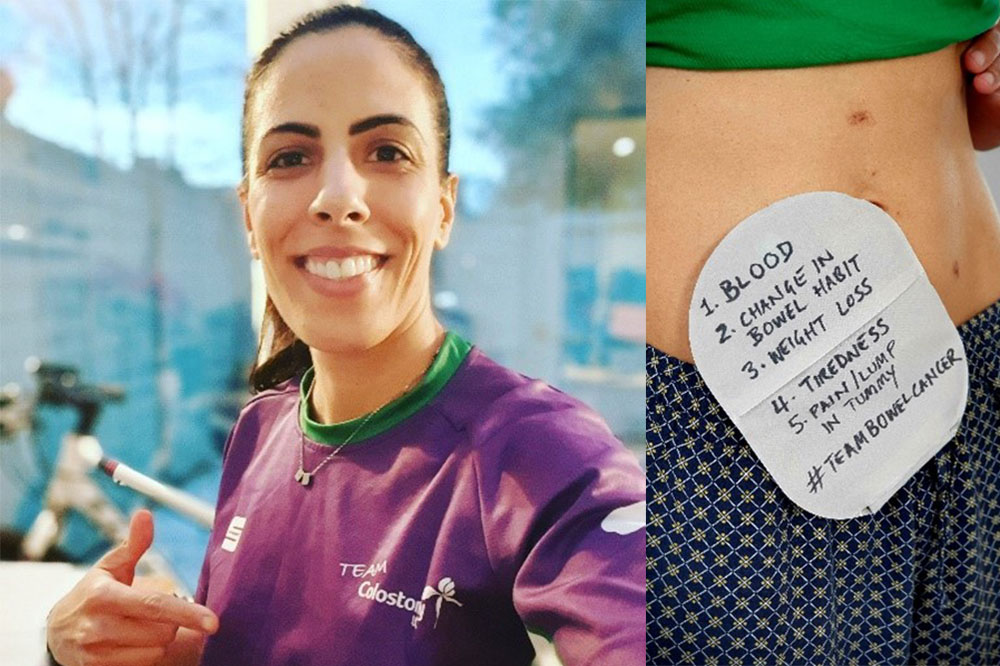 Two years ago I became aware that April is bowel cancer awareness month. It’s never really something I had thought about before.

Two years ago I was recovering at home, having spent 12 days in hospital after having an 8-10cm cancerous tumour removed from my rectum. It was bowel cancer awareness month but at the time I really didn’t have the energy to think about anything but my own recovery. I was 38 years old at the time of diagnosis.

This time last year I was back at work and had joined the MET’s Cancer Support Group as a Committee member. I was at a stage in my life where I wanted to put my experience to use and help others who are going through what one of the worst experience of mine and my family’s life.
The common symptoms of Bowel Cancer are:
– Bleeding from your bottom and/or blood in your poo
– A persistent and unexplained change in bowel habit
– Unexplained weight loss
– Extreme tiredness for no obvious reason
– A pain or lump in your tummy

You don’t have to have all the symptoms. I had bleeding initially and it was something I ignored as I thought it was nothing serious. I had bleeding for a number of months in my 20s. That turned out to be something minor which was checked and dealt with relatively easily with some medication. Looking back I think I knew I wasn’t feeling right for a while but we can find excuses for why we aren’t feeling 100%. Working long hours, which can result in eating ‘bad’ foods. The stress of work or home. All resulting in tiredness and not feeling great.

Early summer of 2018 the bleeding started getting worse, still it wasn’t that much. When I did eventually go to the doctors I still wasn’t too concerned, I thought it would be something minor again. All my test results came back okay, even my tumour markers were normal. So maybe its IBS… my GP wanted to rule out everything else before she diagnosed me with IBS, so she referred me for a non-urgent colonoscopy. From speaking to other people that have gone through the same diagnosis I realise how lucky I am to have a GP that worked to her intuition and because of that niggling feeling she had, maybe she saved my life. I have spoken to people that have had symptoms of bowel cancer for a number of years before they finally get referred for a colonoscopy. Listening to their stories, its heart breaking. So many what if’s…

As well as joining the MET’s Cancer Support Group Committee I became an Ambassador for Colostomy UK, a charity who support people who have a stoma and I came across the charity a few months after I had a stoma. For me the charity fits with my mind-set and what I want from being an ostomate. Empowers you, shows you that you can do everything you did before you had a stoma and offers you support to get your life back to ‘normal’.

There are different types of stomas: colostomy, ileostomy, urostomy. I had no idea what a stoma was until I was told I was having one. So a double-shock for me – I have cancer and now you are telling me you are going to take a part of my colon and poke it out of my stomach? I have an ileostomy which is a temporary stoma and have had several lower colon dilation’s I was ready for a reversal end of March 2020. Covid has postponed things for at least a year. Hopefully at some stage this year I can re-start any dilation procedures I may need and look to have a reversal. I say ‘hopefully’, I don’t mean hopefully I can go back to going to the toilet in the ‘normal’ way, I mean hopefully I can re-start medical procedures so I can go back to normal life. Have my career back on track and a break from hospitals. Whatever normal will be, whether it is with or without a stoma. I know because of how low the tumour was that the likelihood of a successful reversal is low, that I may end up with a permanent stoma, a colostomy. And now I’ve lived with an ileostomy I know I can do it. I was adamant with my health-care team that I wanted a chance to be ‘normal’ and that they should try for an ileostomy if there was any small chance of a reversal. And I stop myself from looking back at whether I made the right decision.

After the ‘big C’ has gone there are still health related issues to consider. I have things I need to consider because of my stoma, a change of relationship with food, how I exercise, my physical health – a lot has changed.

I was a recently invited to get involved with a bowel cancer awareness campaign that GirlvsCancer are doing for this April, this is in conjunction with Bowel Cancer UK. There were seven females that came together to do a super glamorous photoshoot in some swanky toilets, the aim is to get people talking about their poo. For some of us the ‘big C’ has gone but we still have some health issues which is now a part of our lives.

The one thing I would like you to take away from reading this is please don’t ignore your symptoms, listen to what your body is telling you. Get checked out. A lot of people are putting off going to the doctors during this period because of covid and lockdowns, a lot of hospital appointments have been postponed. As a cancer patient I have felt like the country has forgotten there are other illnesses that make us seriously ill and are fatal, it shouldn’t all be about covid. So listen to your body and make sure you get yourself checked out if you feel like things aren’t right. And do it now.