Chris’s Step Up For Stomas challenge! 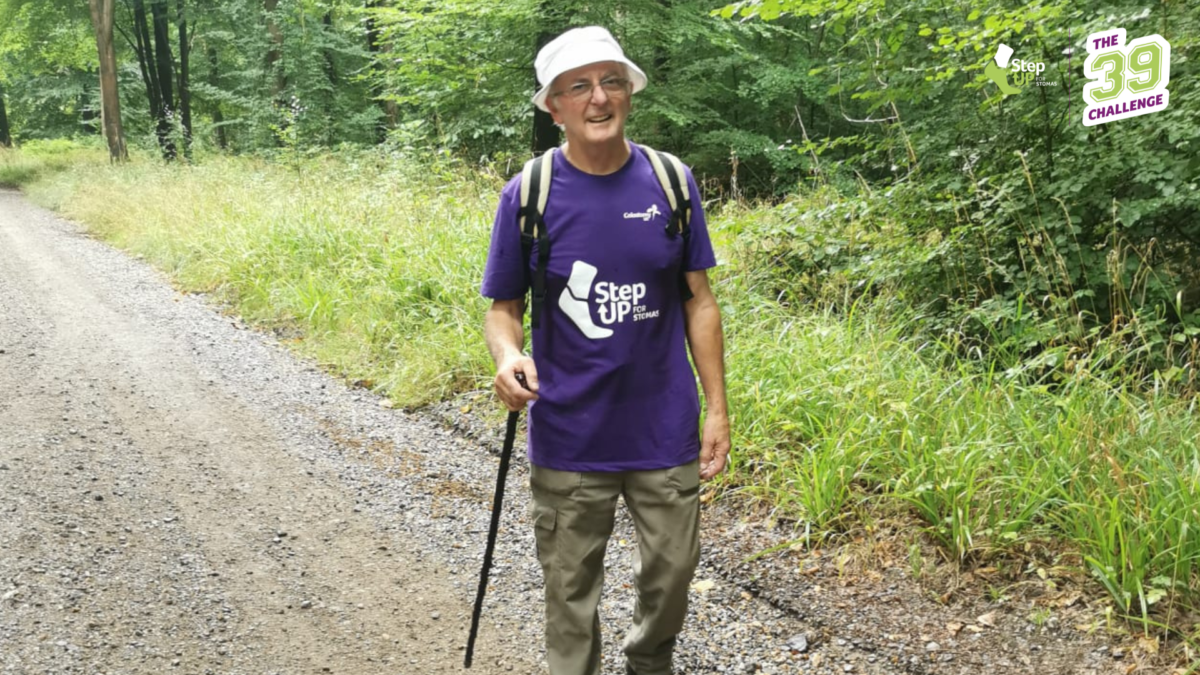 Chris still struggles with aspects of life with a stoma. After nine years of experience with Jim, as he’s named his stoma, he feels more able to talk about his experience.

He first suffered from symptoms of bleeding and discomfort in his teens but was too embarrassed to say anything to anyone, even his mother. The situation eased and Chris got on with his life until the mid-90s when the symptoms returned with a vengeance.

Diagnosed with colitis, he then found himself in hospital for two weeks at a time, over several years as different drugs were tried out on him to try and manage his symptoms.

“In November 2013 I was admitted to the Great Western Hospital,” says Chris, “during what was to be a temporary stay with a new drug trial when my consultant informed me that the medication was not working and furthermore, I had a perforated bowel.

“I would be in theatre the following morning to have an operation otherwise I would not see Christmas. I was so shocked and overwhelmed I burst into tears.”

“I had my large bowel removed and a stoma fitted and was in hospital for eight weeks and lost two stone into the bargain! I was still getting painful symptoms though over the following 12 months, so I had to have another operation to remove the remainder of my colon.

“Having a stoma has changed my life forever. I respect my stoma, I have nicknamed Jim, because without it I wouldn’t be here, but it is a phase in my life that changed everything. My family still treat me the same, but my lifestyle is not the same. I don’t like to be too far from home whereas before we loved to travel,” Chris adds.

“In the night, your stoma keeps working it doesn’t go to sleep – so my nights are constantly disturbed wondering what my bag is doing.”

The worst thing for 71-year-old Chris though is the discomfort he feels with clothing because of where his stoma is situated on his abdomen. He has had to put his suits to one side and favours dungarees over trousers with a waistband.

Chris also suffers from type 2 diabetes due to the steroids that he was taking for six months prior to his surgery.

“I have had ‘Jim’ for coming on nine years and he can still catch me unawares! However, I am grateful to him because without him I would not be here now and would not be able to join in with social occasions with friends and family, and for that I will be forever thankful,” says Chris.

He now finds it easier to talk about his situation and keen to raise awareness of the work of Colostomy UK.

“At 71, I still like to feel needed and have a purpose so Step Up for Stoma helps me with that.

“The Grand Avenue is three miles from end to end, six miles there and back, which takes me two hours to do, and I will be doing 39 lengths. I have made a start, but the total will be 117 miles plus.

“The private road has inclines, and you notice it went you are walking. I meet a lot of people along the way, out for a walk like me, often with dogs in tow (or vice versa).

“Last week, mid-morning, I got talking to two women and I was wearing my 39-challenge t-shirt. They asked me about it, and I explained I was raising funds for Colostomy UK.”

Ever prepared, Chris had made up some of his business cards with his JustGiving link reference added to the text. He had them with him in his rucksack in the hope that he would meet people who would be interested and may want to support him. He was more than happy to dispense a card to each of the women after they had asked if he would note down his fundraising page for them.

What a great tip if you want to spread the word about your 39 Challenge fundraiser. Thank you, Chris!

You can donate to Chris’s Fundraising page here https://www.justgiving.com/fundraising/Chris-Nash15

Find out more about Step Up For Stomas and get involved https://www.colostomyuk.org/are-you-ready-for-step-up-for-stomas-the-39-challenge/