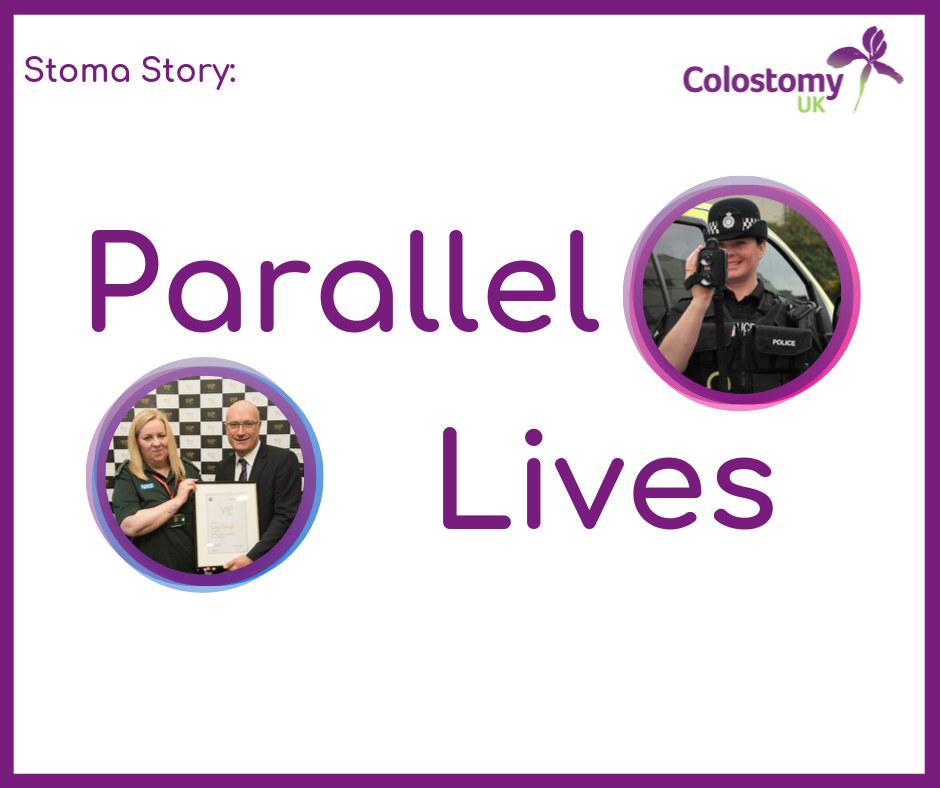 This is a story about a series of bizarre coincidences and the kind of support that only one ostomate can give to another. It’s about sharing problems and the blossoming of a close friendship. More than anything else, it’s about two women who happened to join our closed Facebook support group…

Let’s start with our two ladies, Tracy and Lucy.

Originally from South Wales, Tracy now lives on the west coast of Scotland in a small town near Loch Lomond. Before her stoma surgery, she was a police firearms officer. Ongoing health issues have meant that Tracy can’t do such active work anymore and so she has exchanged her holster for a position in the police control room. Tracy has been with the force for 20 years now and, if that isn’t enough, is married to a policeman too! She has two children, Arwen (14) and Chloe (12). A border collie completes the family.

Tracy’s problems started after the birth of Arwen. In the four or so years that followed, she suffered multiple prolapses of her womb, bladder and bowel. Tracy had a hysterectomy, but shortly afterwards suffered paralytic ileus (This is the paralysis of the intestinal muscles. It often follows some types of surgery, especially abdominal surgery.) and her bowel stopped working. As a consequence she had a loop colostomy in March 2015. She was 39 years old. This was made into an end colostomy in 2016 following a hernia repair. Tracy then had a further hernia repair and her stoma refashioned in May 2018. When I spoke to Tracy in the lead up to Christmas, everything was okay as far as her stoma was concerned, but unfortunately she was having problems with bladder function.

Tracy still remembers the six weeks after her first bout of stoma surgery; it was a dark time for her. Having previously been so active she quickly became frustrated.  Being stuck indoors also gave her too much time to dwell on what had happened and worry about what the future might hold. Stuck in this vicious circle, she became desperate and almost suicidal.  Tracy’s family supported her as best they could. The Police Firearms Officers Association did the same. They sent her presents and also put her in telephone contact with an officer in the Met who had had a stoma and reversal. Tracy spoke to him at length. Tracy said all this helped, but what she lacked most was regular contact with someone (e.g. an ostomate) who understood what she was going through. In the absence of this simple understanding, Tracy started to think that she was the only person of her age facing the prospect of life with a stoma. Two months post-op and while searching the word ‘support’ on the internet, Tracy happened across our closed Facebook support group and joined immediately.

Lucy was born in 1969 and lives in Sutton, Surrey, where she works for the London Ambulance Service in their control room. She has been with the service for almost 13 years.

Lucy started to have bowel-related problems in 2011. She saw a couple of doctors, both of whom concluded that these stemmed from haemorrhoids. As the problems persisted, Lucy went back to her GP Surgery, who referred her to A&E at East Surrey Hospital. It was here that a perianal abscess was diagnosed and Lucy was told to return in a few days so that it could be excised and drained. Days after the procedure was carried out, Lucy developed a fistula and her doctor referred her back to hospital. Matters quickly escalated from this point. Two weeks later, after tests and biopsies, Lucy was diagnosed with anal cancer. In June 2011, at age 41, Lucy had an ileostomy, followed by five and half weeks of chemotherapy and radiotherapy at the Royal Milestone in Sutton.

This didn’t mark the end of her problems. Although Lucy thankfully got the all clear after five years in remission, like many ostomates she developed a parastomal hernia, which required a surgical repair in December 2014. Tests at this time on muscle condition also determined that a reversal was not viable and her stoma would be permanent. In the year that followed, Lucy developed another hernia which, again, required surgery (December 2015). Up until this point Lucy had been pretty much coping on her own, with the help of her stoma care nurse. It was while recovering from her second hernia op, where she was off work for six weeks, that Lucy ‘stumbled’ across Colostomy UK and the closed group. It all came about because she decided to search for ‘colostomy’ while on Facebook. She joined shortly afterwards.

Meeting over the ether…

The ladies joined Colostomy UK’s Closed Facebook Group within six months of each other and both found it a game-changer. Tracy described it as a ‘revelation’, Lucy ‘another world’. They were immediately struck by the friendliness. Both started as passive members, rather than actively contributing themselves. Building confidence in this way is perfectly understandable. It was also during this ‘phase’ that the ladies discovered they were far from alone; there were plenty of other people out there with the same conditions and challenges. It also became clear to them that people of all ages had stomas, rather than it being just an ‘old person’s’ thing, as is so often wrongly assumed.

Tracy and Lucy commented that just reading other people’s posts provided them with emotional support. Tracy also shared many of the posts with her husband and oldest daughter. This struck me as important. I’m sure many readers will agree that it is sometimes difficult to find the right words to express what you are feeling or going through. This is perhaps especially the case for an ostomate talking to a non-ostomate. In effect, the posts were Tracy’s ‘prop’, enabling her to communicate in new and positive ways with her family. Both ladies found the regularity with which posts appeared on their Facebook feed and the often mundane nature of these posts helpful too. People sharing funny anecdotes or pictures of their pets was a constant reminder to them that ‘normality’ was achievable and, perhaps, just around the corner.

As members of the Facebook group will know, it is also a good place to share stoma issues and get practical advice. It was just such an issue that prompted Tracy to  make her first post. This ultimately led to her meeting Lucy over the ether. While doing the school run one day, Tracy started to suffer pain around the area of her stoma. She thought she would see if others in the group had experienced the same and what they had done about it. Lucy was one of the first to reply and said that it could be a hernia (as it turned out to be). By this point Lucy had already had two hernias and so recognised the symptoms. Tracy acknowledged Lucy’s comment, but didn’t think much more about it, until a few days later, when she received a message from Lucy asking how she had got on at the hospital. This simple act of compassion and human kindness marked the start of their friendship. As both ladies told me, the connection between them was instant. They began exchanging private messages, before moving to e-mails and then to talking on the phone. Lucy explained that, although by the time of their first contact she was something of a stoma expert (having had her surgery five years earlier), the relationship was a two-way street right from the off – with both women helping and supporting one another.

As far as Lucy is concerned, Tracy was (and is!) a breath of fresh air and gave her a new lease of life at a time when she was feeling lonely and detached. Since their initial meeting, their friendship has gone from strength-to-strength, even though they have never met one another in the flesh. As well as being there for one another for all the challenges that life with a stoma can present, they also share news and do all the other things that you would expect between close friends. As their friendship has deepened, so the coincidences I mentioned at the start have started to emerge. Aside from both having stomas and both having had hernia repairs, they share the same birth month and do similar jobs. Both work in the control rooms for the emergency services. And, as they have discovered, despite working for different emergency services, they use the same command and support systems and even have the same type of radio! Thanks to Tracy, both also now wear the stoma bag covers which she had specially designed. Lucy’s proudly displays the London Ambulance Service emblem and Tracy’s the Police emblem. The two of laugh that these should form part of the uniform for ostomates in their respective service!

I hope that you’ve enjoyed hearing about Tracy and Lucy. If you are already a member of the Facebook group, then my guess is that you will have nodded in agreement at least a few times while reading their story. If you aren’t a member, then it’s easy to join. Remember, there is no pressure to be ‘active’. It’s fine just to read posts and draw support from what people say and gather information from and comfort from hearing about their experiences. Who knows, maybe your next best friend is just a click away!