‘Have bag, can travel’ 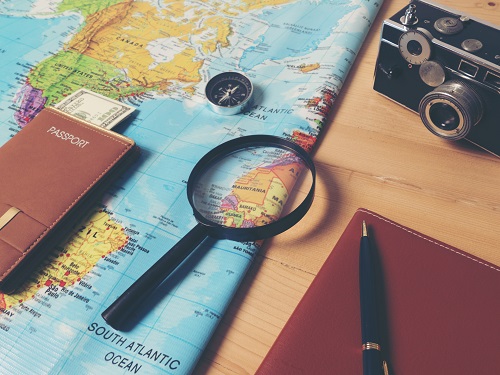 By Dr Richard Biddle, writer and researcher at Colostomy UK

Spring is in the air and all over the country people have begun the countdown to their summer holidays. The sense of anticipation is palpable. Perhaps it’s just me, but I’m sure I’ve noticed phrases like ‘I need a break’ and ‘where are you off to this year?’ creeping into conversations. At Colostomy UK we know that ostomates are just as keen to ‘top–up the tan’ as anyone else. In 2017 we sent out over 3,500 Travel advice booklets and responded to nearly 700 travel–related enquiries. Judging by last year’s calendar competition our readers certainly like to visit far flung places too. We had pictures submitted from Australia and Israel, as well as Norway, Spain and Hawaii.

We also know that air travel and foreign holidays can be a source of concern for people with stomas. Common worries centre around transit through the airport (body scanners, searches, baggage allowances) and stoma management (foreign diet, output, running out of supplies). Sadly, as last year’s holiday season got underway, a much higher than normal number of ostomates contacted us to complain about the poor treatment they had received at UK airports (particularly Manchester). The emergence of this trend was all the more worrying coming, as it did, on the back of a publication by the Civil Aviation Authority (December 2016) which stated clearly and unambiguously that people with hidden disabilities and conditions should enjoy the same opportunities for air travel as everybody else.

As advocates for ostomates in general, we didn’t feel it was enough just to support the people who contacted us. In our view the volume of complaints pointed to a wider problem. Further investigation revealed that a lack of awareness amongst airport  staff about stomas was the common denominator in all the cases. Having worked with airports in the past on similar issues, it came as no surprise that the head of security for Terminal 2 at Manchester Airport was happy to co–operate with us in finding a solution. As 2017 drew to a close there was a flurry of activity. This saw us: visiting Manchester Airport; being invited to and attending their Accessibility Expo and subsequently becoming members of their Accessibility Forum; hosting airport security staff at our offices in Reading; being invited to work with Outsourced Client Solutions (OCS), who provide customer service staff for many of the UK’s airports. 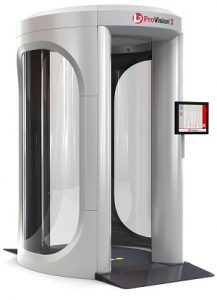 The spirit of these meetings was one of positive collaboration and much was achieved. As I write this article, we are in the process of putting together teaching resources that will be incorporated into the training programmes for all new and existing airport staff at Manchester. The airport has also been able to amend some of its standard operating procedures to better take account of the needs of ostomates. As Manchester Airport Group also owns Stansted, East Midlands and Bournemouth airports, we expect a broader roll–out in due course. Word of what we are doing has obviously started to spread, because in January we were contacted by Heathrow Airport and asked to join their Air Transport Group. Of course, there will always be instances where people have a negative experience on their journey through an airport. But, by raising awareness and by having input into the training of customer–facing staff, we hope to halt last year’s trend in its tracks.

We have also learned much by working with the organisations mentioned above. It is very clear that although they want to make transit through UK airports as smooth as possible they have to balance the needs of travellers against a demanding and ever–changing security threat. As a consequence, no–one is exempt from the various security processes in place. As security staff advised us, terrorists and criminals will use everything from shoes to medical appliances, in order to disguise and hide illegal items. There is, however, much that individual ostomates can do to make their airport and air travel experience positive. The one key message I have taken from our discussions so far, is that people need to take responsibility too and the best way they can do this is by being prepared. This means doing things like contacting the airport well in advance if you have additional needs. The checklist in our Travel Advice and the hints and tips below give further valuable advice on preparing for travel. But being prepared goes further than this… it also means having realistic expectations and understanding that, as an ostomate, you are still subject to the same security checks as everyone else. Given the fluid nature of this story, any fresh advice we receive will initially be posted on our website. So don’t forget to check it a week or so before you travel! 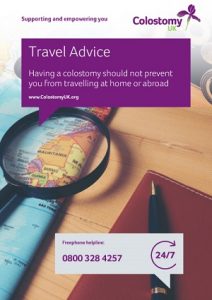 –  You can request not to go through a body scanner but if you do, you WILL be subjected to a full search.

– Most UK airports now operate a hidden conditions lanyard or bracelet scheme. These are available from assistance reception areas. Wearing them identifies you to staff as having additional needs.

– If you need assistance on your flight you should advise your airline at least 48 hours before your departure date.

– You should AVOID requesting the presence of a healthcare professional if you  are searched. Airports do not generally have such staff on standby and the likelihood is that you will miss your flight.

– You can only take more than 100ml of liquids in your hand luggage if there is a prescription label on said item.

– You should expect to be treated the same as everyone else. Having a stoma does not exclude you from any security checks