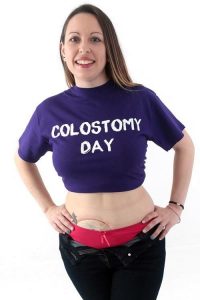 Why my stoma is so super to me

7pm I awoke from what seemed like a dream. Had I even been asleep? There was a funny smell in the air and I could just make out some faces and voices around me but still wasn’t quite sure of whom I was looking at! I heard a familiar voice, ‘Shell, it’s James, it all went well and you’ve been out for 8 hours’. Slowly but surely it all came flooding back to me. The minutes before I went under, the weeks before I faced the biggest decision of my life, the months before waiting impatiently for my life to improve & the years before…searching for hope!  On Weds 29th July 2015, I arrived at St. Marks Hospital in Harrow for a Panproctocolectomy. This procedure would be performed through a single keyhole incision & result in the removal of my entire Colon and rectum. Now this may seem like a shocking and drastic operation to many but for me, it was the beginning of my life again. My surgeon Mr. Antoniou ensured me he would take great care of me and give me the neatest and most functional stoma he could. I would spend up to a week in hospital recovering and then go home to heal over the next few months. The day I decided to request this surgery, will forever be etched in my mind, because that day, was the day I found hope!  October 2005, I began to struggle waking up for work and life seemed like this big dark cloud hanging over my head. I’d walk to work, wishing the hours away and spending the day with my mind racing like a time lapsed movie. Nothing seemed to give me joy. Not my friends, plans nor anything I had always found joy in before. I was numb. I was depressed. I visited my GP who confirmed this to be so and was put on medication. If only I knew this was just the start of years of being medicated. Things did slowly start to appear clearer over the following months but I was still not feeling quite right. I was suffering lots with an upset bowel. Almost as if butterflies were fluttering inside of me but with blades for wings. I ached from head to toe and everything I ate, shot out of me faster than a speeding bullet. I did not however believe it was anything other than a side effect of the depression, until I passed blood. Bright red pools of blood, splattered up the toilet bowl like a scene from a horror movie. Scream, is what I felt like doing!
I returned to the GP, who then proceeded to pull out some surgical gloves and direct me to the table over in the far corner. I was to remove my trousers and knickers and lay on my left side in a foetal position. This was a position I would lay in many more times over the next 10 years. He began to examine me by inserting his rubbery fingers into my back passage. All I can remember is trying to breathe and be calm, knowing that muscles relax better this way but no amount of relaxation, helped the pain I was enduring! It only lasted a few seconds but enough to stay with me for a long time. I returned to sit at his large bureau like desk. His office was like that of a university professor from years gone by. He had many books and anatomical sculptures too. I guessed from his dusty covered head, that this greying man had years of experience and so would answer my questions and help fix me. ‘Miss Lawes, I believe you may have something called Ulcerative Colitis. Now I will refer you to a consultant who can do further tests and help you’. That was that. No explanation, no medication, no instant fix. Right, I thought, I’ll go to this consultant and hopefully he can fix me. How naive I was!

My appointment didn’t take long to come through, as I was fortunate to be under private care at the time. I arrived and met another very intelligent looking gentleman who repeated the examination I had unfortunately experienced just weeks before but also proceeded to do so with a rigid tube too. This tube was inserted into my back passage and air was pumped into it. It was VERY uncomfortable! Sounds of ‘hmm…mmm…ok’, came from the consultant. I was directed to sit back across the desk from him and presented the verdict. ‘Miss Lawes, you do have some mild inflammation in your rectum. This is known as Proctitis’. I was offered a further procedure to look into my entire Colon and then left. Again with no explanation, information or answers about being fixed. It was at this point I began to feel scared.

It took a further few months, tests (Colonoscopy & Barium x-ray) and being left in the dark, to finally get some answers. I was to be diagnosed with Proctitis and given a drug called Asacol (an ASA known as Mesalazine) and to take 2, 3 times a day. I did this for the next 4 years with zero contact with my consultant. This was a big error! I would go on to become very unwell and experience daily bouts of blood, sometimes up to 15 times a day. My bosses wanted answers as to why I was continually absent and to be honest, so did I!

I returned to my consultant and would go on to have years of zero support, zero information and a plethora of medications. A feeble attempt to control my UC, which had now been re-diagnosed as left-sided distal UC. I went through 2 pregnancies suffering constantly with bouts of diarrhoea, blood and mucous. I was now going to the bathroom 30+ times a day, hiding away indoors through fear of accidents and screaming inside for answers, help and understanding from my family and peers but nothing came…It was at this point I began researching. I researched my disease, connecting diseases, treatments, associated charities and online support groups. It was in these support groups that I would find understanding. I spoke to others like myself and the loneliness relinquished slightly. I also saw recommendations of St. Marks, an IBD (Inflammatory bowel disease) specialist hospital and after many years of suffering, being made to feel my symptoms were in my head because they didn’t match my scopes and being unsupported; I decided to request a referral there.

7 years had passed and not a day went by that I wasn’t in pain, was able to eat without fear, was able to sleep well, wasn’t anxious about social gatherings or leaving the house and wasn’t concerned about the effect my illness had on my parenting and relationships. I was existing, not living. I was in a dark place. Spending all day on the toilet with no joy from life, really takes it’s toll. 7 years had ground me down and I quite literally wanted to die. Death was a way out, surely knowing that my condition had an end or a cure, was better than these miserable existence? Not even my partner or my children, gave me reason enough to stay in this world and SUFFER. I needed hope and fast!

That hope came in the form of Dr Adam Haycock. On my first trip to St. Marks he listened…he actually LISTENED to me! He understood all I said, agreed I should not have been left on steroids for 4 years with no other viable treatment, he understood that I was desperate and not ONCE did he belittle me. He didn’t treat me like a statistic nor shut me down when showing the broad knowledge I now had of my condition. This man gave me options, something I had never had in 7 years. I agreed to try a medication called Azathioprine but he noted that nothing had helped thus far and was willing to offer whatever I felt was necessary.

I lasted 2 weeks on this med. Bearing in mind I had tried the following over & over – Asacol, Asacol Foam enema, Pentasa, Pentasa suppositories, Predsol suppositories, Pred Foam, Mezavant XL, and was now dependent on Prednisolone (oral steroid), I was now DONE with medication. I had had so many colonoscopies with so little action taken, I wanted it over. I couldn’t go on. So on my second appointment he noted the drug reaction and began to offer me more options, in the way of drugs. I mean I hadn’t even tried the new whizz drugs that are biologics but I was done with taking meds and waiting months to see results, to only end up with hideous side effects and complete failure. I cut him off mid sentence and his response was ‘ you want surgery, don’t you?, I nodded silently and he responded with ‘follow me’. I was led to meet my surgeon. My heart was racing and I was actually excited to hear what he could do. Of course I knew the ins and outs of colorectal surgery by then but I needed to hear it from the horses mouth. I wasn’t disappointed! He excitedly told me about 2 or 3 stage procedures, that would result in a J-pouch, whereby I could pass stools almost as I did before I became sick. He went on to tell me the failure stats & issues with a pouch and I knew already that this option wasn’t for me. Just the thought of more inflammation, more drugs and the chance of failure and repeated surgeries…nope, not for me! I wanted it out. All of it. Forever.

So fast forward to that day I heard James’ voice. I had got my wish and had my ileostomy bag…for life!!! When copes mentis I turned to James and said, ‘It’s gone’. The realisation that I no longer had a diseased Colon, was beyond amazing. My mind was full of all the things I now wanted to do in life. All the things that had become a dream, could now be a reality!

I am one of the many out there that have chosen life with a bag, over the former misery of chronic disease. I see many who go through emergency surgeries due to things like cancer, endometriosis, chemo or radiation damage, chronic constipation and so on…and they wake with fear and loathing. I reach out to you all, to ensure you that life with a stoma is not all bad. In fact for many of us, it’s the best thing that’s ever happened! I now run a local support group, an online group, a blog and advocate for as many ostomy charities and organisations I can. I shout from the rooftops that living with an ostomy saved my soul! In my case it didn’t save my life medically because I had other options that MAY have brought remission but it most definitely saved me from taking my own life.

Yes, having a stoma can throw up its challenges but what doesn’t? Life was never meant to be easy but it most definitely wasn’t meant to be miserable. So face those leaks, pancaked bags, blockages and bag changes, as challenges you CAN overcome and learn to deal with. Your stoma has saved you in one way or another and this should be celebrated, not commiserated. My stoma is a #superstoma because it saved me from a miserable existence and offered me another chance at living!