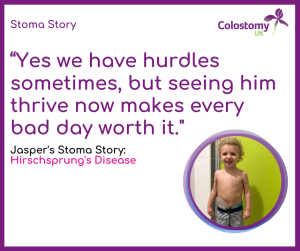 Some of you may have seen a video of a three year old boy with a stoma filled with excitement before our Active Ostomates swim in Windsor last September.

His name is Jasper and this is his story from the eyes of his mum Hannah.

“Jasper has a rare condition called Hirschsprung’s Disease. Usually it’s picked up within days of birth but somehow he got through the net.

So on a snowy January evening this year  while I was 33 weeks pregnant with his brother, we found ourselves in St Georges Hospital in London.

Jasper had a biopsy to test for Hirschsprung’s, and it was decided that they would create an ileostomy then and there. His large intestine has so much stool in it, it had stretched to maximum capacity and was at risk of bursting.

After we first met one of the surgeons on arrival, they popped a finger up his bottom and he lost 2.5kg of stool. His chest deflated like a sad balloon, and although traumatic for everyone involved, as soon as it was over he got up, hugged the surgeon and said thank you. We all cried with relief and happiness – he had been such a shy boy.

The weeks that followed weren’t easy for any of us. Jasper was only two and a half, he didn’t understand what was happening and resisted everything.

Changing and emptying his bag was really difficult, we get a lot of leaks and even with a convex bag, it’s taken a long time to navigate. As Jasper has got older (now nearly 3 and a half) he has got used to ‘bag life’. He can now tell us when there’s a hole, if his skin hurts or if ‘red’ (his stoma name) gets big. As his stomach muscles are so weak, he gets large prolapses almost weekly which are extremely difficult to manage for both him and us. It usually makes him sick, unable to walk, eat or drink, but we stay with him and keep him calm.

Six months into our journey and we *think* we know what to do in most scenarios and are a little numb to all poo related drama. We always joke that we have a love/hate relationship with his stoma. We hate it happened to our little boy, but he is SO much healthier with it. He had “failure to thrive” before his operation, and very delayed speech. six months later, he’s 50cm taller, has so much more energy and is such a gorgeous engaging little boy.

As first time parents we had no idea that our ‘calm and chilled out baby’ was actually seriously unwell and now we can watch him reach his full potential. Yes we have hurdles sometimes, but seeing him thrive now makes every bad day worth it.

We had no idea what a Stoma was until our surgeon mentioned it that day. My husbands grandfather had one and we didn’t even know. So many hide this amazing thing that has saved their life and everyone has their reasons for it. Trying to hide quite a large bag on a small child isn’t easy, so we embrace it. Jasper asks for “bag out” as it’s more comfortable for him, and we are more than happy to oblige. We are proud of what he has achieved and how amazing he is inspires us daily, so I would never want to hide his bag. We continue to give him as normal a life as possible, including being active (try keeping a toddler still!). We swim, go trampolining, bike riding etc and if it causes a prolapse, it causes a prolapse but it’s a happy memory that is worth it every single time.”