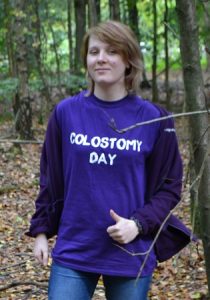 Hiya, my name is Jasmine and 24 years old. I got my colostomy on 1st July 2017 after an emergency operation to save my life.

It all started when I was 20/21 and I managed to get a ‘full rectal prolapse’ I didn’t know at first, I just felt something coming out my bum every time I went to the toilet. No doctors believed me due to my age and mental health condition. So I took a photo and showed my doctors. I got sent to my local hospital and they didn’t want to operate so I got sent to a specialist hospital.

In March 2016 I have a laparoscopic rectopexy to correct this problem surgery went well and I was happy with results. 5 months down the line it came back. So more testing revealed I had too much colon and not enough pelvic muscle to hold it up.

So June 2017 I had a bowel resection. After the operation I had several issues and a bad time in the hospital. I got discharged after 5 days but I wasn’t fine. I rang 111 for help on my day of discharge and they gave me tips to try get rid of air. I saw my GP two days later who had no idea and said my swollen stomach was due to air from my operation. So two days later I couldn’t eat, drink or go to toilet. I couldn’t stand up straight or walk very well and phoned 111 again crying with pain and they sent an ambulance. After a CT scan it revealed my operation had failed and I had a large hole in my bowel which had been leaking everything into my abdomen. Causing peritonitis and severe sepsis. I was rushed into surgery the next morning. I had no idea that I was going to end up with a colostomy.

After being put under for my operation I don’t remember anything til I woke up several days later. I found out I had been put into a medically induced coma after the first operation to clean everything out to make sure nothing got worse and then had a second surgery two days later for the colostomy. When I woke up I had TPN running through a central line in my neck, I could barely move. It turns out I had dropped 2 stone in a few weeks and had lost a lot of muscle. That if I had stayed at home that night I would of more likely of died within a few hours. I had no idea how sick I was. I had to relearn how to walk. I am now 12 weeks post op and still struggling to come to terms with my body. I have a big 20cm scar down my tummy which half of it is still open and I’m still swollen. My whole body has changed, but I am thankful for my life.

I’ve met so many great people through social media since getting a colostomy, and I’ve never experienced so much kindness before.