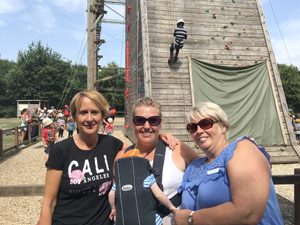 There’s no denying the importance of support groups. The evidence is there for all to see. Search the internet and you are confronted with a dizzying array; just about every patient group and condition seems to be covered. Some groups meet in village halls, some meet in coffee shops, some even meet in people’s front rooms. Increasingly, members never see each other in the flesh but ‘meet’ instead via their computers in a virtual world, just as Tracy and Lucy did through our closed Facebook support group (see page 10). Indeed, support groups are such a characteristic of the post–industrial landscape they even feature in fictional works. Chuck Palahniuk’s transgressive novel Fight Club offers perhaps the most famous example. Tyler Durden, the book’s troubled narrator, finds attending support groups (even those unrelated to his problem of insomnia) is the only way he can get to sleep at night. At this point, you’re probably wondering where this article is going…in case you had started to worry, let me allay your fears. I’m not about to announce ‘Ostomate Fight Club’ as a new strand of Colostomy UK’s Active Ostomates project! Instead, I wanted to tell you about a gap in the ostomate support group ‘market’ and how some enterprising stoma care nurses have managed to plug it in their part of the world.

We first got wind of what Michelle Hill and Fliss Nutting had been up to, when they presented their work at the Association of Stoma Care Nurses’ annual conference last year. But, for them, the story started back in 2014 when Leicester Royal Infirmary (where they all work) took over the area’s paediatric stoma care service. The needs of this patient group differ in many ways to adult stoma patients. As the ladies explained each age has its own set of challenges. With babies it’s all about trying to get stoma bags to fit, which can be especially difficult if the baby is premature. Then when a baby starts to move, bag security is a problem. Feeding issues are another concern. As a child gets older, so fresh challenges emerge. Integration into nursery and school can be tricky, including making sure that the child is able to participate in the same activities as their peers. For adolescents concerns around body image and relationships understandably enter the mix. The parents of children with stomas need lots of support too.

Although the service offered by Leicester’s paediatric stoma care team is comprehensive, the ladies quickly identified that peer–to–peer support (both child to child and parent to parent) was lacking locally. Feedback from parents and children suggested this was needed and, with the benefits of support groups well documented, the ladies decided to set one up themselves. The first issues they faced were of a practical nature. Support groups need somewhere to meet but, given this was a group for children of all different ages, the venue had to be more than just accessible. It also needed catering facilities and had to be suitable for hosting a range of play activities, including arts and crafts. Once the venue had been secured the next thing was advertising the group’s first meeting. As SecuriCare nurses, the ladies were able to do this through SecuriCare’s Hand in Hand magazine. They also put posters up in all the relevant wards at the hospital. Even so, as Michelle explained when I spoke to her, it was an anxious time. They worried that no one would come, or that people wouldn’t return. Although the first meeting was a success, with around 30 turning up, it was clear that it would take time for those attending to feel comfortable with one another. Fliss says this was especially the case with the children. The adults on the other hand wasted no time getting to know each other.

From our experience of support groups at Colostomy UK, we would say that early meetings being a little subdued is normal. This is why, at adult support groups, activities like chair yoga or our recently launched Creative Arts sessions can play a vital role as ‘ice breakers’. Of course their benefits go much further, but something they do help to do, is get people talking to one another! In essence, support groups evolve over time as people find their voices and decide what they want the group to be. Because the ladies were so attuned to the needs of those attending (both the children and adults) and took on board suggestions they received, Gut Feeling has gone from strength to strength. Meetings are now bustling affairs. The children and young people get to mix with ostomates of their own age whilst enjoying a range of activities. Interaction is encouraged by team games, bingo, team quizzes, crafts and free play. The older children also like to use the pool table and table tennis which is available at the venue. While this is all going on, the parents and carers have the chance to share and discuss all sorts of issues, from travel, type of bag and helping their child with stoma management, to the challenges of starting nursery, primary school and secondary school. They are also more than happy to buy some raffle tickets, the proceeds from which help to cover the running of the group and the special events they now hold. This year’s include: a ‘Lion Learners – come and meet the animals’ day; a ‘No boundaries – football skills’ session led by an ostomate; a day trip to Beamanor Hall; and, to round the year off, a Christmas party complete with Christmas jumper competition!

Setting up and running a support group requires effort and commitment. But, as Michelle and Fliss have shown, the rewards are many. Gut Feeling’s success is testimony to the vital role it plays in the local community, offering children and adults alike the benefits of peer–to–peer support. The feedback they have received and continue to receive speaks for itself. As one parent recently said: “I think dealing with children with stomas [is] difficult …not only for the child but the whole family. We all benefited from meeting up with other families in similar situations, the support group is a real help, answering questions you struggle to ask. We as a family also find it a comfort to talk to parents and discuss problems…[it] also helps my daughter who struggles to talk about things but is able to open up a little when we attend. We would be lost without their love and support around us – can never thank them enough”.

If on reading this you have been inspired and are thinking about setting up a group in your area, then we’d love to hear from you. We’ll be happy to help and advise you. So don’t delay, contact Giovanni our Development and Fundraising manager on 0118 939 1537 or email him on: Giovanni.cinque@ColostomyUK.org