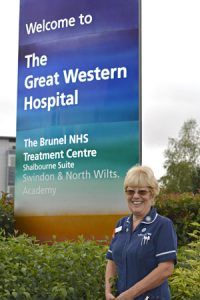 Have you ever wondered what life is like in a busy stoma care department? Well towards the end of last year I took the opportunity to find out and interviewed Judy Pullen who is the clinical nurse specialist in charge at the Great Western Hospitals NHS trust in Swindon. Judy trained as a nurse back in the 70s and has been working in stoma care since 1991. As you can imagine, with almost 30 years’ in the field, there is very little that Judy doesn’t know about stomas…albeit she was at pains to point out that even for someone with her experience it was important to keep her knowledge base up–to–date with the latest research and evidence–based practice. During her career, Judy has seen the massive changes that have taken place in stoma care and stoma management (including the many developments in bag ‘technology’). Between 2012–2016 she was the inaugural chair of the Association of Stoma Care Nurses UK. She lectures to student nurses and junior doctors and is currently involved in the CIPHER study, which is a national, multicentre research project, investigating the prevention and treatment of parastomal hernias.

Judy’s department is located within a District General Hospital with 500 beds (as opposed to a tertiary centre or specialist centre). The trust’s catchment area includes part of Wiltshire and extends westwards as far as Chippenham. In population terms this equates to around 1.3 million people. As stoma care departments go, Judy describes hers as ‘reasonable’ in size. It has four stoma care nurses, a healthcare assistant and a secretary. They also provide placements for students from Oxford Brookes University doing adult nursing degrees, with students spending up to three months of their training with the stoma team. In a normal week the department sees an average of 40 patients in stoma clinic. Patients follow a set pathway. These ‘pathways’ are common across the NHS but vary  in their detail between departments. They are also reviewed regularly to make sure that they continue to meet patient needs. In Judy’s department, patients are seen a week after surgery, they then have two, one month follow–ups. They are then seen three months later, then six months and annually thereafter. Additionally, patients are seen as emergencies, with a slot kept available for this each day. Patients are able to self–refer. Judy’s team also keep a list of ex–patients who will happily talk to new ostomates, and make use of us at Colostomy UK from time–to–time too. Judy says that regular appointments usually last around 30 minutes and cover everything from dietary advice to ongoing management. First post–op appointments take longer. This is because as well as covering all the issues around stoma care, the stoma care nurses also undertake some of the functions previously done by district nurses, such as removing sutures. I asked Judy about the size of the department’s caseload. She thinks this is around two thousand patients at any given time, but explained it was difficult to be precise because some patients move away from the area after their surgery, while others move in etc.

The patients that Judy’s department sees are split roughly 50/50 between permanent and temporary stomas. Not all of these patients have had their surgery locally. Southmead Hospital in Bristol performs the Trust’s urology surgery. People with spinal injuries are operated on in Salisbury. Some patients have their surgery in Oxford. In total she estimates that they have around 200 new patients each year. Judy said that awhile back, it was anticipated that surgical advances would lead to less stomas being formed. However, rather interestingly, Judy said the opposite has happened. This is largely down to the fact that advances mean that surgeons can now operate much lower down in the colon than ever before. This has led to an increase in temporary stoma formation to protect anastomosis (join in the bowel). She said that the increase has been influenced by other factors too. For obvious reasons the introduction of the bowel cancer screening programme has had an impact, so too has the nation’s ageing population. Quite simply, as people live longer they have more time to develop things like bowel cancer. In Judy’s area, an increase in the population has also led to a rise in their patient numbers.

Like hospitals, clinics and GP surgeries up and down the country, Judy’s department has issues with patients not turning up for appointments. Understandably this is something that she finds very frustrating. Not only is all the pre–appointment preparation time wasted, it also means that another patient has been denied the opportunity of seeing a stoma care nurse. Judy emphasised a number times the importance of ostomates having regular reviews. When I asked why, Judy said it was all about prevention. Changes in weight for example, can lead to changes in stoma size and if the hole in the baseplate or flange are not then cut to the new size, skin problems can result. As Judy explained, getting on top of these sorts of issues quickly was vital. She was also keen to point out that her advice about reviews was something that applied to even the most experienced ostomates. She said it is fairly common for patient’s to say: “I’ve had my stoma for 15 years I don’t need a review” only to then end up in the department as an emergency case a couple months later. As she put it: “the 4:00pm panic call on a Friday because a bag won’t stick or no longer fits”.

As you would expect ostomates visit the department with all sorts of issues and enquiries. Judy said the most common that they see are peristomal skins problems, parastomal hernias, ulceration, pancaking and granulomas. She also said that recently they have started to notice an increase in the number of enquiries about irrigation. When she said this, I wondered whether our regular slot on irrigation and all the irrigation stories that we share in Tidings might have had something to do with this!  Judy sees this growing interest in irrigation as a positive development as she, along with her colleagues, firmly believe that patients should take responsibility for their health. That said, she also is fully aware that patients are often unsure when to seek medical help and sometimes delay doing so because they are worried about wasting the time of a healthcare professional. It was with this in mind, that her department put together a leaflet called ‘THINK’ which they give to patients. This is based around a simple traffic light system which aims to help patients seek advice at the appropriate moment and in a timely fashion. Her hope is that the leaflet will help patients to understand what they can expect and also prevent problems escalating.

I finished by asking Judy what areas of stoma care she would focus on if money and the time resources of her department were no object. This was followed by a long pause before Judy outlined her wish that she and the team could be more proactive, getting out into the community and educating GPs  and patients, around issues such as wastage and appropriate prescribing. This was a topic that I wrote about back in the Spring 2018 edition of Tidings and it’s clearly still very much on the NHS agenda. Judy said that her team try to think in terms of ‘necessity’ or ‘unnecessary accessory’. She gave the example of an air freshener. Even though a patient might be entitled to have one of these on prescription doesn’t mean they should have one! As she said: “When I need an air freshener for the toilet I go and buy one. Ostomates are no different!”

I hope you have found this ‘behind the scenes’ insight interesting. I would like to thank Judy for taking the time to talk to me about her department and all the hard work that she and her team do.