On September  15th we travel to Beckenham to face the  South London Silverbacks Masters, then on November 10th our destination is West Yorkshire as we go up against PDRL United in Featherstone

South London Silverbacks were formed in 2014 and have spent the last four years spreading the gospel of Masters Rugby League far and wide including tours to France and hosting the Australian Masters side. 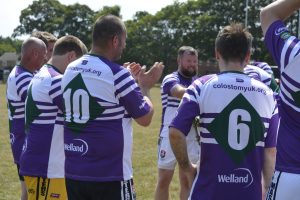 Team Colostomy UK Rugby League is part of the Colostomy UK ‘Active Ostomates’ project and aims to raise awareness of the Charity and of Living with a stoma, & also highlight that people with a stoma can do anything including playing the toughest of team sports.