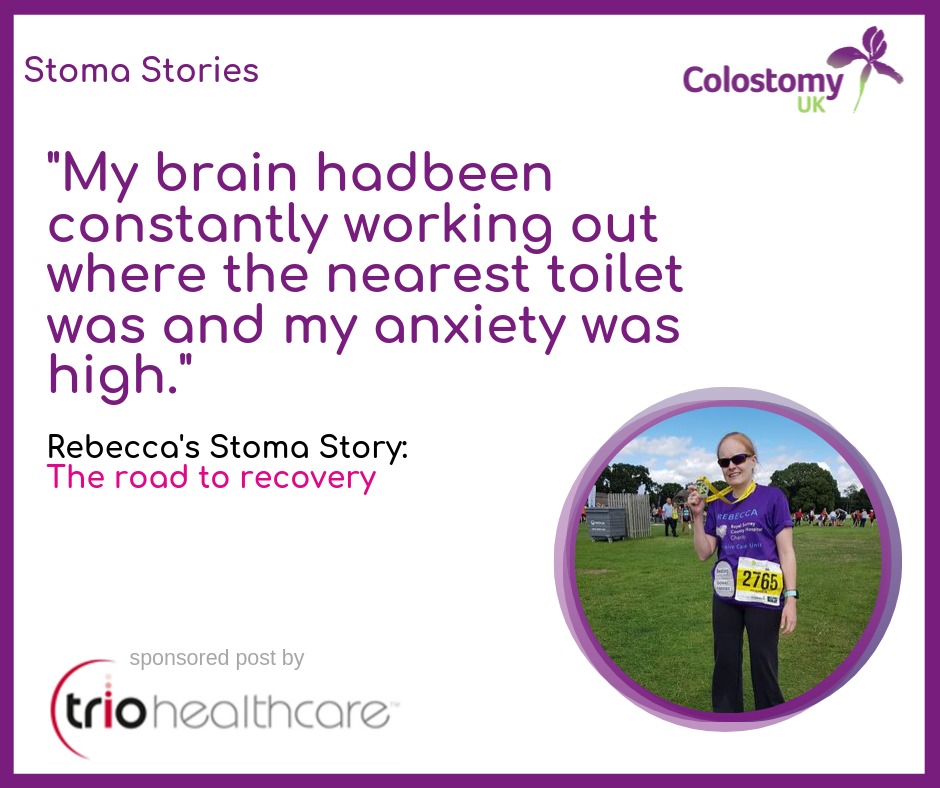 This month the Trio team would like you to hear the story of Rebecca, one of our incredible ostomates who within a year went from only being able to walk 1km to running a half marathon. Rebecca will also be appearing in our latest marketing campaign alongside some of our other ostomates.

“After being diagnosed with ulcerative colitis at 19, I experienced symptoms for the next ten years. I was given various steroids and anti-inflammatory medications but nothing seemed to work. I did my best to live as ‘normal’ a life as possible but looking back now, I wish I had opted for stoma surgery years earlier!

At the age of 30 I was diagnosed with bowel cancer and stoma surgery was the only option. In some ways I am grateful that the decision was taken out of my hands and although it is not always pleasant, life with a stoma is so much easier than life with colitis. My brain hadbeen constantly working out where the nearest toilet was and my anxiety was high, worrying that I might not get there. I had my entire colon removed and have been left with an ileostomy. I was very sick in the weeks that followed and my weight dropped to 43kg. After three weeks in hospital I returned home to put weight on and recover as best I could before my chemotherapy started.

Six weeks later, a few kilos heavier, I returned to hospital for my first of twelve cycles of chemotherapy. 18 hours later I was rushed into A&E by ambulance after suffering a drug-induced seizure. I was moved to the oncology ward, where 24 hours later I suffered a second seizure followed by a series of four cardiac arrests. I was rushed to the Intensive Care Unit by the duty crash team, where my family were prepared for the worst.

After a week in Intensive Care, another ten days on the ward and a long recovery at home, I was desperate to get back into sport. Before my surgery I loved running and was able to run 10km, usually without too many problems with my colitis. This was not the case for swimming or cycling which worsened my symptoms. In the months after returning home I could barely walk a couple of hundred metres, through weakness and pain. Each day I walked a bit more, albeit, to the next house in the road and back.

Sport is what has kept me ‘sane’ after everything I went through and I continue to use it to give me a purpose, while I haven’t been well enough to work. In September 2017 I walked my first kilometre and in November I jogged the same distance for the first time.  I built up the distance I could run and by Christmas 2017, I could run 6km.

Much to mine and my doctors’ amazement, in September 2018 I ran my first ever Half Marathon, raising over £1000 for the Royal Surrey County Hospital Charity, with the funds going to the Intensive Care Unit. Although I have vowed never to run that far again, I continue to run and swim, once or twice a week.

I found running so much easier with a stoma than with colitis but not without its problems. I wear Vanilla Blush support wear to prevent hernias, I use Trio Elisse Skin Barrier to help my bag stick to my skin rather than slipping off when sweating, and I will not run without Trio Silex flange extenders  to stop the edge of my bag cutting.  I also love Trio Elite remover spray and would be lost without these products!

My book on my journey from cancer diagnosis, stoma surgery, chemotherapy, and cardiac arrest to half marathon is now available online from Lulu.com  search Rebecca Langley, if you’d like to have a read!