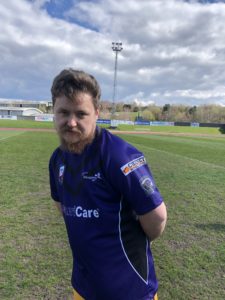 “Team Colostomy UK, in many ways, is just like any other Rugby League team; We fulfil fixtures. We have a group chat that goes off 24/7 with views on games, memes and general banter. We all love to give our team manager a hard time (because let’s face it, their job isn’t hard enough sometimes), and we all love the sport of Rugby League. However, most of the guys and girls of Team Colostomy UK are playing with  a stoma.

For those of you who, like me when I first got involved with the team, are unaware of what a stoma is, a stoma is a surgically-created opening in the abdomen. It diverts the flow of bodily waste from a damaged or non-functioning bowl or bladder, allowing it to be collected in a bag. As I mentioned, when I first got involved with Team Colostomy UK I had no idea what a stoma was, or just how many people have one. Over 200,000 people in the UK have a stoma, which is a huge amount considering I had no knowledge of them.

Since being involved in the team, however, I have seen how much these amazing people can do. Rugby League, as you well know, is not just a contact sport but it’s arguably the most physical collision sport there is. Studies have shown that in a tackle you can experience up to 21-22 g force which is crazy when you think that a 40mph car crash is about 35 g’s. A lot of you will know what that tackle force feels like, now imagine it if you have a stoma. Sure, there are ways of securing the bag but the fact that these warriors are taking these collisions and smiling afterwards is phenomenal.

On a personal note, I have learnt so much about this invisible condition and the amazing people associated with it.

Being involved with the team from the beginning brings with it some great memories. From playing alongside Rugby League legend Paul Anderson, playing a curtain raiser for the Batley Bulldogs and having Josh Charnley and Owen Farnworh as our water boys. My favorite one however, is always when a new player is making their debut, especially those that have a stoma. There is always a level of anticipation and nervousness while they are kitting up. I can only imagine what is going through their head. This could be the first time they have played since their surgery. What makes these memories my favorite is their face once they take their first hit. It goes from being nervous to having the biggest smile on their face. In that tackle, in that second, we have helped changed not only their perception but their friends and families of what can be done by people with a stoma, and its beautiful to see. Some of these players have gone on to play again for their local clubs, something that they never thought they would do again, and one player (Ryan Owens) has even gone on to score the match winning try in the PDRL final for Leeds Rhinos!

The team is an opportunity to educate more and more people and eventually get rid of the stigma associated with stomas. I have introduced players to the team, both do not have a stoma, and are now as passionate as I am about breaking down barriers and spreading the message and stories of these warriors. Team Colostomy UK is a major part of my life now and I couldn’t be happier.

After an amazing 2022 we are looking to make 2023 even better. If you would like to be involved, please get in touch, and remember you don’t have to have a stoma to help tackle the stoma stigma”