Isabel made her debut in August 2021 during our double header against Invicta Panthers & Robbie’s Roos. She talks about how her journey led from stoma surgery to the rugby league pitch 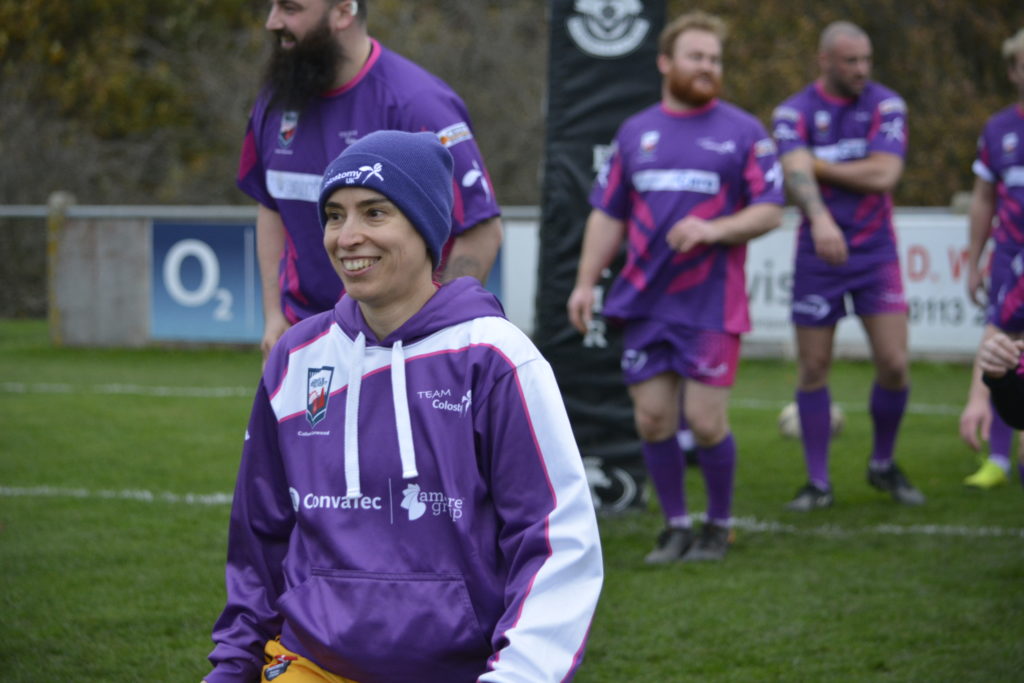 “Had anyone told me 20 years ago I would ever be playing rugby league, I would have laughed out loud and told them to get real!!!!

But that’s the reality of it. And I honestly think that my stoma bag was the main reason (if not the only one!) that got me into rugby league.

The way I see it, it all happened because after a couple of years of suffering with ulcerative colitis, I got so ill that the only way to save my life was by having stoma surgery. I celebrated my 40th birthday at home in bed just out of hospital. And because of a series of complications I pretty much spent two and half years in bed in and out of hospitals. Those were worrying and stressful months, not knowing whether I would ever recover, what my life would look like if I did in fact recover, would I ever be able to go back to my ‘normal’ life? But those were also months to reflect on what my life had been and what I would like it to be if I ever managed to get out of that bed. And the one thought that kept coming back was ‘enjoy and experience life as much as you can, don’t fear trying new things if the opportunity presents itself’.

In November 2019 I decided to go to see Team Colostomy UK play Aldershot and Fleet on a very rainy afternoon , where I had the pleasure to meet Rebecca Langley, who unknown to me back then, was the first female player with a stoma for Team Colostomy UK and my inspiration to get into rugby. I was so impressed with the diversity of the players (all ages, different abilities), you could feel the spirit of inclusion all around. It was a competitive match but at the same time it felt like a big family looking after each other. The game would change accordingly to the players physical ability from full tackle, to touch rugby

After seeing that match, I was so inspired that I started thinking about the possibility of playing. I had been offered the opportunity to play but I had never touched a rugby ball and all my knowledge of rugby came from watching a few Six Nations matches on tv with my husband explaining the game! A couple of years later I still get confused when people talk about rugby union and rugby league!

And then Covid arrived. While many people got into cooking, painting, or learning new languages during the lockdowns, I started going to the local rugby pitch with my husband to learn how to throw and catch the ball (yes, as basic as that!). And then, the next thing I know is that I’m playing with Team Colostomy UK down in Kent in August 2021 against Invicta Panthers. I only played the last 10 minutes, but oh my goodness did I enjoy those 10 minutes!!!! I was hooked for life

After those 10 minutes in the pitch, I couldn’t wait to play again. So, without any second thoughts, I took the opportunity to play again in November against the Bramley Buffalos in Leeds. And now I cannot wait until the 2022 season starts again, which promises to be another great season

From here I would like to encourage all men and women, young and not so young, who love the sport of rugby to join us. If playing is still something you are not sure about, come and support the team. As well as a great day out, I believe it will be a life changing experience. Having a stoma doesn’t mean our lives stop or slow down. It means we need to adapt and find safe ways of doing the things we love, and Team Colostomy UK and the rugby league community are showing us how this is possible”