Ed Rowland made his Team Colostomy UK debut on August 19th 2019 at the home of Bramley Buffaloes in Leeds, when we faced the Political Animals. This is his story of the day. 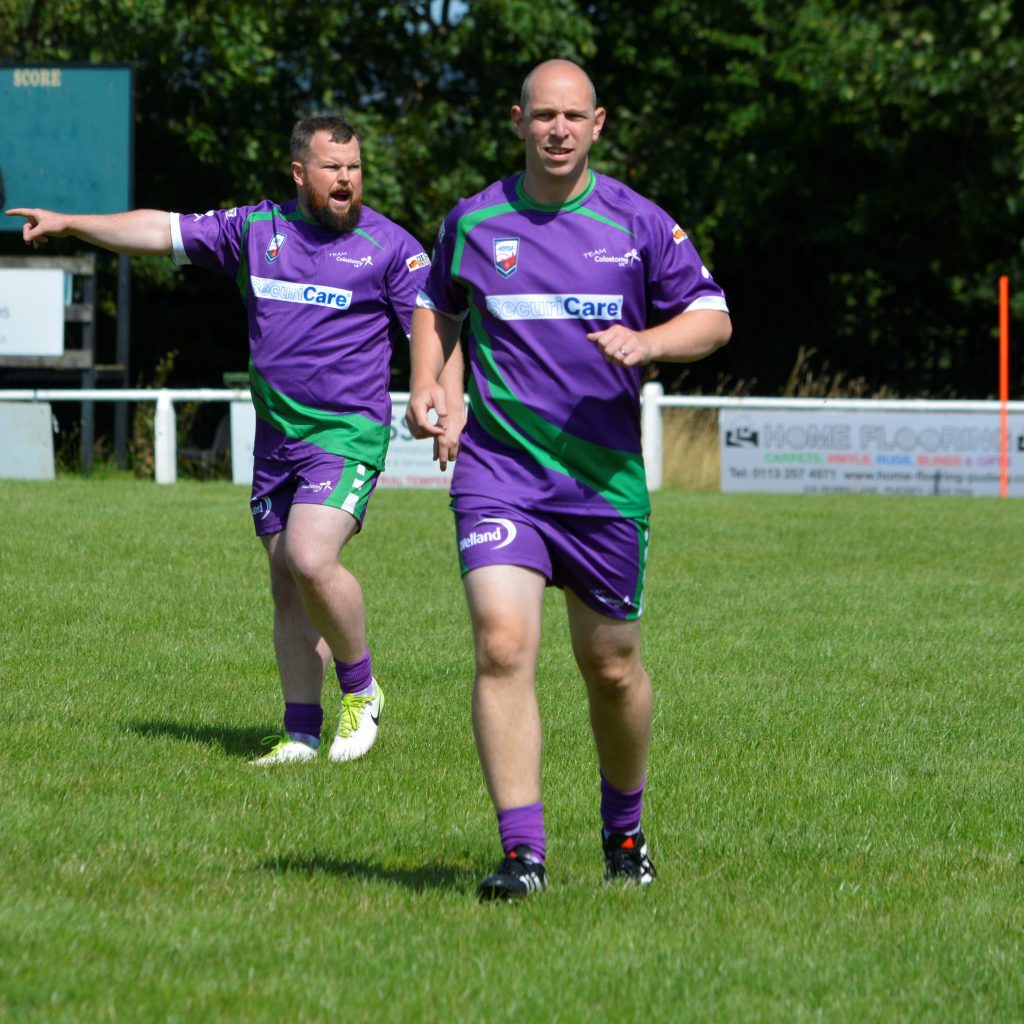 “It was the summer of 2019, and I was nervous about leaving my home and traveling an hour down the road to Leeds.

I had only recently moved to the North East with my family and transferred jobs. A massive change in my life, and now I had volunteered to pull on the Team Colostomy UK rugby league shirt. I’ve never played league before, and grew up going to a union school….but that was 20 odd years ago, and I had grown older, bigger, with more life experience, and now there’s the matter of having a stoma.

Thankfully I was confident in taking hits and rolling around on the floor from work, but this would be a real test. I had purchased a pair of cheap boots, packed a bag of kit, made sure I had my armour that I wear for work, and set off first thing. I had no idea where I was going, so was completely reliant on the sat nav.

After a few wrong turns and swear words later, (which would have previous set off a need for the toilet with my UC) I arrived at the ground and was met by a very smiley Giovanni and Libby who began to introduce me to team members as they arrived.

I then took myself into the changing room. It was probably the first time I’ve actually got ‘changed’ in front a group of people with my bag. I had been on holiday and let it all hang out but this seemed a bit different. I had a sneaky look at the variety of support wear, bands and protection plates others were wearing. I was wearing my work ostomy guard, but debated with myself as to whether to wear it at all. I settled on the idea that I would as it would give me a bit more confidence in taking a hit. It then dawned on me….I won’t be able to wear my glasses. I wear them all the time and things are significantly blurry, particularly in one eye, without them. I took them off and made my way out the changing room squinting and worrying that I would find it difficult to see the ball, let alone catch it when it was passed to me!

Just then I was spun a ball from a blurry faced player in purple. I caught it and my eyes adjusted a little. We then proceeded to warm up with a few up and under kicks. The first of which, I nailed a catch, pulling the ball into my torso and dropping down to my single knee. My confidence rocketed upwards and I was suddenly that 15 year old school boy back on that rugby pitch.

I was told I would be playing as second row. I was initially comfortable with that as I had played hooker at school, and being a forward, I didn’t need to worry to much about lines and formations, or so I thought. I soon realised rugby league was very different to union.

The whistle blew to start play. The first time I received the ball, I thought I could still move like a teenager, and tried a side step past an opposing player, which I did, only to realise the ball had been snatched out of my hands. But the whistle blew. I again received the ball, and took it into the tackle, holding the ball tight this time. I took the hit and went to the ground with the ball nestled into my right armpit. However as I hit the ground I felt a crack and a pop as the wind knocked out of me. It was lucky I couldn’t talk as there were a bunch of swear words coming out in my head as I stood up. I heard my team mates telling me to play the ball, I couldn’t breath let alone ‘play the ball’. But I saw the ball on the floor and used my foot to roll it behind me as I had seen players do on the tele. I then bent over with my hands on my knees to catch my breath whilst the game continued.

I quickly felt the adrenaline rushing through me and the pain subsiding. I was hooked. I loved the feeling of being part of this team, despite also feeling I wasn’t any good at this. But it clearly didn’t matter. I took the ball into another tackle to be held up by two players who gave me a pat on the back, one of which said good lad, in a distinctive northern accent. I made a good couple of tackles, took a few good hits, passed the odd decent ball, missed a couple of tackles and loved every second of it.

Afterwards, it was great to share a pint with both teams, talk about the game, and watch the rugby on the bar television. I left for my drive home with a boost of confidence, a new network of friends and, of course a few battle scars which I was a little bit proud of!