Murray Godsman thought he’d never play Rugby again after having stoma surgery, but on May 22nd he’ll be making his Team Colostomy UK debut when we face the British Asian Rugby Association in Batley. 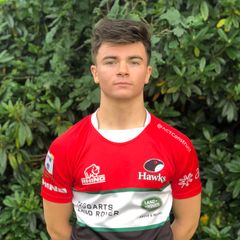 “Prior to being diagnosed with Ulcerative colitis Rugby  was a huge part of my life.  I was playing and training rugby up to five times a week.  I was a part of the Scottish Rugby Academy and had represented my country at age-grade level. That all came to an abrupt stop when I had my first flare up and was subsequently diagnosed.

After a couple years of back and forth, trying new medications and lots of hospital visits, it was decided that it was best that I had surgery to remove my colon and be given a stoma.

Before stoma surgery I never imagined myself being able to play again unless I opted for a reversal in the future, but I came across Team Colostomy UK while researching online to see if playing with a stoma was possible.  I managed to get in touch with a couple of the guys and advice was shared about how best to approach returning to playing.

Since then, I have been back playing for my club and university which has been great. Only a couple of weeks ago the guys I had been in touch with sent me a message about an upcoming game and asked if I would be interested in playing which I was delighted to say yes to. After the kindness and support I was shown it will be good to get to meet them and the rest of the team to play a game together”