Home > About Us > Our trustees > David Buchan: Secretary and Governance Trustee 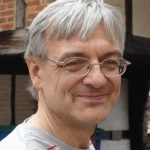 David was brought up in Surrey, lived in London for many years, and is now back in Surrey with his wife Cynthia.  They have 3 grown-up children.

David spent most of his career in central Government, as an auditor and civil servant, finishing as a Senior Civil Servant in the Department for Transport.  He finally ‘retired’ from the civil service in 2019 but keeps busy with a number of interests in the charitable sector.

He now works part-time as Operations Director in his parish church – running finance, purchasing, HR, and anything else ‘behind the scenes’, including giving advice to the Parochial Church Council on matters relating to how a charity should be run.  In some ways the church is similar to Colostomy UK, in that it depends on a small team of paid staff alongside many committed volunteers.

David has experience of serving as a trustee for other small charities, and is currently undertaking a part-time diploma course in the Charities Programme run by the Cass Business School.  David says “This is a demanding course intended to give a thorough grounding in charity management and governance, and I hope to put what I learn to good use in charities I either work for, or serve in a volunteer capacity such as by being a trustee of Colostomy UK.”

David’s connection with Colostomy UK is through his Mum who had an emergency operation in 2014 and woke up with a stoma.  She likes to keep as active as possible and enjoys visiting historic places with family and friends, but her first question is often “What are the toilets like there?”  It has made David aware of the issues around making toilets accessible for all, and the difference that greater public awareness could make.

He hopes to make use of his understanding of transport networks, to support the charity as it seeks to improve the provision of accessible public toilets.  But for now his focus is on understanding the issues facing the charity and helping to ensure it is managed in line with the best principles of charity governance.

David reflects that “Supporting Colostomy UK particularly appeals to me as it works in a field that would mean little to most people unless they, or someone they are close to, has had a stoma”.  Yet its work has such scope to make a significant difference to people’s lives.”